You are here: Home / Endorsement Interviews / What You ‘Need to Know’ about THIS Judge—Educate Before You Vote!

Assemblyman, Ozzie Fumo, is a defense attorney and professor at UNLV law school.  Herndon is a long-time Clark County judge and former prosecutor.

Herndon was twice overturned by the Supreme Court—in a ten-month period—once for violating a litigant’s constitutional rights and a second time for abuse of discretion. 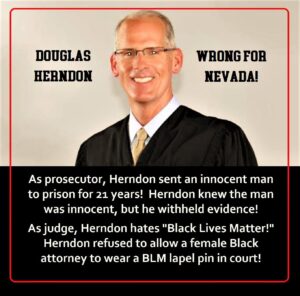 THE WRONGFUL CONVICTION of FRED STEESE

We believe that a prosecutor who withholds evidence – in a murder case – is unfit to sit on the State’s highest court.  To withhold evidence is beyond unsportsmanlike—it’s flat-out cheating—and it’s totally unacceptable!

Contrary to popular notions, the role of prosecuting attorney is NOT to “bag convictions” for the D.A.; but rather, their role is to “do justice.”  No matter how badly Herndon wants to score a conviction and make a defendant “tap-out,” he must be fair and square!  The prosecutor has a duty to give to the defense any exculpatory evidence, (i.e., evidence that tends to defeat the prosecutor’s case-in-chief).

In the wrongful conviction of Fred Steese, Judge Herndon has publicly shed tears.  Judge Herndon appears to be contrite and he may sincerely wish to open the door to rectitude; however, the fact remains that Judge Herndon knowingly convicted and sentenced a man for murder—with actual knowledge of the man’s innocence—all the while withholding exculpatory evidence.  At the time of the murder, Fred Steese was over 800 miles from the scene of the crime!

Most telling, Herndon’s own daughter has been lobbying for a new bill to compensate innocent folks—like Fred Steese—who were wrongfully sent to prison.  Herndon forced Steese to take a plea deal that forbade him to bring a civil suit for this nightmare—all the while knowing Steese is innocent.

Meanwhile, Herndon offers no apology to Fred Steese.  The case remains sealed.  And the true murder has never been prosecuted.  And for this reason, VIPI, in good conscience, cannot recommend the judge for the high court in Carson City.

“It is better to let 100 criminals go free than to imprison one innocent man,” [Benjamin Franklin].

We urge the Governor to pardon Fred Steese—to restore his right to vote and his right to keep and bear arms.   And we urge YOU to vote for Ozzie Fumo—for Supreme Court of Nevada.

THE CASE of the BLM LAPEL PIN

Oh, did we mention race?—Judge Herndon is White and Attorney Ballou is Black.

Okay, so “why” did Judge Herndon instruct Ballou to remove the pin?  Well, the reasons remain unclear.  Apparently, Judge Herndon thought the BLM lapel pin was inappropriate … okay … but why?

According to Herndon, the BLM lapel pin violated “rules of decorum” based on perceived political overtones associated with the BLM movement.  Judge Herndon believes the courtroom is not a “public forum” under the First Amendment.  But we freethinkers disagree.

So long as Ms. Ballou’s pin does not broadcast (i) pornography, (ii) violence, or (iii) criminality, she is free to choose whichever pin suits her.  Frankly, we’d like to see Ms. Ballou wearing a pin that reads: “Fight Judicial Corruption!”

When all’s said, the BLM lapel pin is small, in fact, so entirely innocuous, one has to wonder what all the fuss is about.  Does Herndon have a larger, undisclosed agenda?

We’d like to ask Herndon to provide a list of acceptable label pins!  Which of these pins are acceptable: “Stand UP to Cancer” pins?  “Support Our Troops” pins?  “Veterans In Politics” pins?  Peace sign pins?  “Remember Bldg. 7” pins?  “Indict Ochoa” pins?  How about pink ribbons?  Or yellow ribbons?

When Judge Herndon asked Attorney Ballou to remove her “Black Lives Matter” pin, the judge showed bias and the judge violated Ms. Ballou’s First Amendment right to free speech – along with her right to petition the gov’t for redress!

And remember, it’s a teeny-weeny lapel pin!  How can Herndon, from the bench, even read a lapel pin at the counsel table?

We believe that Black lives, Brown lives, and White lives matter.  But Blue lives?  Why?—because Blue is a choice—it’s a profession.  Folks are born either Black, Brown, or White—but nobody’s born Blue (cops) and nobody’s born Green (military).  Blue and Green are choices!  (And you can’t choose your color at birth!)

The BLM affair creates an unsavory appearance of impropriety.  Here, we see a fastidious White judge going out of his way to put the kibosh on “Black Lives Matter” by ordering a Black female attorney to remove a lapel pin!  This is just ridiculous!

In all fairness to Herndon, we note that Herndon’s decision was not a knee-jerk reaction; he threatened no fines nor sanctions; Herndon gave Ms. Ballou an opportunity to be heard in open court.  However, no matter how you slice it, Herndon blatantly discrimination.

During these troubled times, it just looks bad to have a White judge telling a Black attorney that she is forbidden to wear a “BLM” lapel pin!  This shows demonstrable bias!

Here’s what makes Herndon look bad: attorney Ballou, for many months, wore a lapel pin supporting “Bernie Sanders” in Herndon’s courtroom without so much as a word from Herndon.  And thus, it would appear that Judge Herndon is less than even-handed when it comes to lapel pins.  Herndon’s disparate lapel pin policy violates Title VII of the Civil Rights Act of 1964—discrimination based on “race.”

Apparently, Herndon sees no “decorum” violations when prosecuting attorneys wear “Fraternal Order of the Brotherhood” pins—but when it comes to “Black Lives Matter,” Herndon feels the need to shut down the message.

“It’s not an accident that he’s overlooked ‘Feel the Bern’ pins,” said Sarah Hawkins, an attorney who witnessed the back and forth with Ballou in Herndon’s courtroom.

Notably, because Fumo vs. Herndon is a statewide race, this contest affects voters from Vegas to Carson City and from Goldfield to Elko.  The winner of this election contest will sit on Nevada’s highest and most venerated tribunal—for six years.

We need a Supreme Court Judge who is fair, compassionate, empathetic, and non-discriminatory.

And that’s why we recommend Ozzie Fumo for Nevada Supreme Court, Seat “D.” 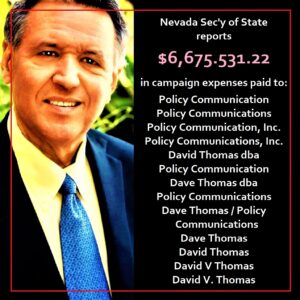