You are here: Home / Endorsement Interviews / Land of Confusion!

THEY COUNT BALLOTS, DON’T THEY? 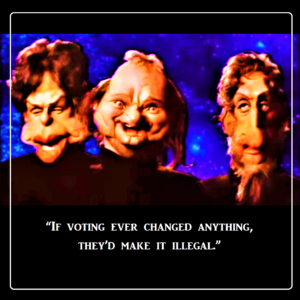 DATELINE—Las Vegas, Nev., (Nov. 7, 2020).  The general election was Tues., Nov. 3rd.  Even though mail-in ballots were still in transit, Nevada stopped the vote count on Wed., Nov. 4th, but then resumed it on Thurs., Nov. 5th.  And the vote count now continues…but eligible ballots must be received no later than Tues., Nov. 10th.

We, at Veterans In Politics International (VIPI), believe that Nevada authorities should wait until the last ballot arrives—so that they may count everybody’s vote.  Call me “old-fashioned,” but I believe everybody’s vote should count, including mail-in ballots, so long as their ballots are properly postmarked by Tuesday, Nov. 3rd.  By law, Nevada has a cut-off date of Nov. 10th, upon which the counting must stop.  Notably, these cut-off dates vary from state to state.

Is it just me?—or is the vote count going slower than usual?  Schrödinger’s equation holds that the vote count should speed-up to reflect Hubble’s universal expansionist theories; however, this year’s election may see the slowest vote count ever!  But that’s only because there are oodles of mail-in ballots this year—which must be counted in only seven (7) days?

Yes, the slow-as-molasses vote count is due to record numbers of mail-in ballots, which the Secretary of State anticipated, right?  Well, it now appears they failed to properly prepare for the mountains of mail-in ballots!  Rumor is they’re swamped!

In Nevada, mail-in ballots must be postmarked by Tues. Nov. 3rd, and received no later than Tues., Nov. 10th to be considered eligible.  But wait!  What if the snail mail is slow?  Or, what if the postal carrier gets interrupted?  Ya know?  Like in Goodfellas?

We all remember the mailman scene in Goodfellas, [Robert DeNiro, Ray Liotta; (1990)].  Paulie Sorvino’s crew gently persuades the mailman to never deliver another letter to Ray Liotta’s mother.  After they put his head in a pizza oven, no more letters from the mailman!  Okay, so how many mail-in ballots are lost in this manner?  If Joe Pesci influences the mailman to not deliver mail-in ballots, it may affect the outcome of the election and ultimately subvert the structural integrity of our nation! 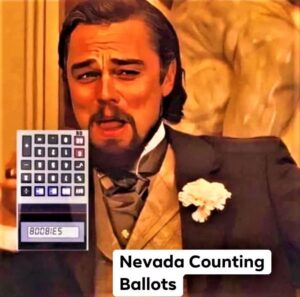 On Tues., Nov. 5th, Nevada “temporarily” suspended vote counting in the 2020 election.  Stop right there.  What do they mean by “temporarily?”  And why stop the vote count in the first place?  They should count ALL the ballots?  Right?  And why does Nevada have only 7 days for counting?  What happens if, on Day 7, they’re not done counting?

Why do they have ballot count deadlines in the first place?  Did they count all the mail-in ballots in previous elections?  (Will we ever know?)  There’s really no reason to place artificial deadlines on when to stop the vote count.  We believe two weeks is a reasonable time to count all the ballots.

The county registrars MUST count all ballots!  Any lawsuit to stop the vote count should be treated with suspicion and immediately rejected.  “Count all ballots!”  Period!

GHOSTS of ELECTIONS PAST

In elections past, did they count all the mail-in ballots from marines, air force, soldiers, and sailors stationed abroad?

We are learning that vote tallies actually CHANGE based on the mail-in ballots that slowly trickle-in.  And this eleventh-hour surge benefits some candidates!  We see some candidates declared the winner on Tuesday night, only to be losing on Thursday night!  Just goes to show—every vote counts!

On Tuesday night, Tom Letizia was ahead of David V. Thomas in the hotly contested race for Family Court Judge Dept. “U.”  If they had stopped counting ballots on Tuesday night, Letizia would have won.  However, as mail-in ballots trickle-in, David V. Thomas is now leading the race!  Remember, VIPI predicted Thomas would win, (and pay-out @ 4:1 odds), simply because Thomas fleeced his client to the tune of $112k compared to a measly $30k for Letizia, (i.e., 4:1 odds).

Okay, back to our story.

So, on Tues., Nov. 5th, Nevada mysteriously halted the ballot count, which was set to resume on Thurs., Nov. 7th @ 9:00 a.m. (PST).  Apparently, the count is back underway, but again, why halt the vote count in the first place?  It’s anti-American!

Is there ever a legit reason to stop counting ballots?  (No!)  Even if one candidate is ahead by 900,000 votes, and there are only 100 ballots left to be counted, the Registrar MUST count those votes!  We need accurate tallies—for statistical purposes!

Nevada Secretary Of State (SOS) needs quality control.  They need analysts.  They need statisticians.  Remarkably, SOS hires no analysts.  Why not?  For goodness’ sake!  It’s all about “counting” votes!  How come they don’t hire numbers crunchers?

The real problem is Nevada Secretary of State, Barbara Cegavske.  How come she makes the Contribution and Expense report so hard to read?  It’s as if she doesn’t want the People to be able to analyze statistical data.

In order to better keep track of “who’s paying who,” SOS must institute a single-payer system in which David V. Thomas is assigned a PAYEE Identification Number.  That way, it won’t matter whether candidates pay money to David V. Thomas or Dave Thomas, or Policy Comm. Ltd.  People must be able to “follow the money” to better understand how election contests are engineered in Nevada.  David V. Thomas would tell you that he has to pay for different items for his candidates such as billboards and print ads, but anybody with half of a brain knows he increases the price to get a cut of the money from each vendor or worked out a deal. Why not have his candidates write a check to each vendor? Naa are you kidding me that would interfere with Thomas’s profit margin!

We need more sunshine laws!  We need a Secretary Of State who is willing to count every vote!  But sadly, SOS demonstrates a willingness to not count votes, which we find unacceptable.

DOWN the RABBIT HOLE

(Not for the faint of heart.)

ALL ELECTIONS are FALSE FLAGS!

The shocking truth is that all elections are *false flags* — i.e., staged media events calculated to sway public opinion.  All the signs are present — intensive media coverage, conflicting first-hand reports, and gov’t explanations make no sense at all!  (Get it?!)

If you pay attention to the nightly news, the numbers just don’t add up!  (Kinda like the Covid numbers, ya know?!)  How many provisional ballots are left to count?  How many precinct ballots?

This year’s election, perhaps more than any other, demonstrates the simple fact that all elections are staged events to entertain the masses—who are passionate about electing new slave masters.  This year’s election was blatantly rigged—not so much the results, but the chaos element—the Butterfly Effect.  As the old Wall Street saying goes, “in crisis, there is an opportunity.”

But it’s all sleight of hand — with crisis actors getting paid to spout scripted dialogue — to sway public opinion towards their hidden agenda.  The media coverage on mail-in ballots is totally intense!  Not one GD Covid update in three days!

THIS:   “Having been involved in several election cycles, a committee to caucus to county and state conventions, to the national convention, I can say assuredly, with a conviction that cheating occurs at each and every step of the process, regardless of party. Witnessed it personally-(and was a victim)-every election, paper ballots included.”

AND THIS:  “Election cheating has been happening since they voted with stone tablets and chisels. It’s not how many votes, it’s who counts the votes. Our entire country is in peril at every level with power-drunk, power-hungry, soulless, greedy, evil tyrants. I’ve been asked for my prediction in this one; we all lose.”  (Thank you to the lovely and talented Ms. Cindy Lake, Las Vegas, Nev., for her poignant words!)

This cannot end well.  As more mail-in ballots arrive, numbers will continue to change.  What happens if all the lawsuits are not decided by Jan. 20, 2020?—Inauguration Day!  Will Trump accept an adverse result?  Remember, Trump remains Commander-in-Chief of the Armed Forces until Biden dethrones him.  If Trump gives military orders after Jan. 20, 2020, will the military obey?

EMANCIPATE YOURSELF from MENTAL SLAVERY

None but ourselves can free our minds.  The problem is that no voter is able to confirm (or dispel) whether his or her vote was actually counted, (or not), and if by a lucky chance it was counted, was it counted correctly?

A cynic once said, “If voting ever changed anything, they’d make it illegal.”  Maybe they already have!

HARD EVIDENCE? 3,051 NV VOTES CAST BY OUT OF STATE VOTERS

Last Draftees-Vietnam VeteransTHE COUNTDOWN to SUPER TUESDAY is ON!!