You are here: Home / Home - Featured / A newspaper for the Native American community a voice for the voiceless!

Veterans In Politics video internet talk show interviewed Kena Adams coordinator for the Indian Voice Newspaper. The paper was born in Las Vegas and branched out to San Diego and Hawaii. 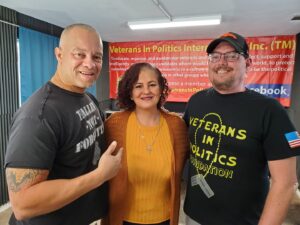 Adams stated that the Indian Voice is 35 years old in an attempt to give voices to people that generally don’t have a voice.

Adams stated that the African American and the Native American community share the same struggles by being uprooted and cast out.

Adams stated that the Las Vegas Paiute and the Moapa Paiute are the two remaining tribes in Southern Nevada. Adams indicated that many more tribes are in Northern Nevada.

Adams stated that the Indian Voice’s mission is for the betterment of all people.

Adams stated that the Indian native tongue and medicine men are being extinct. Let’s not forget it was the Navajo Code Talkers that helped us win many battles during World War II.

Black-Rose Communication is the editor of the Indian Voice.