You are here: Home / Endorsement Interviews / California Candidates flock to Veterans In Politics

Over the years Veterans In Politics International (VIPI) has welcome candidates from California, the last few years a tremendous amount of military veterans have been engaging with VIPI. 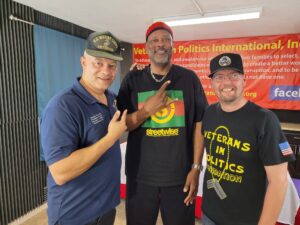 Hill is from a family of military veterans. Hill is also a former correctional officer of 10 years in two of California’s maximum-security facilities.

Hill wants to be called “Satan”.

Many topics of discussion were brought up in this interview.

Please click on the link below for more information on Steve Hill:

“The people are ready for the truth”: Steve Hill talks about his run for CA-25: 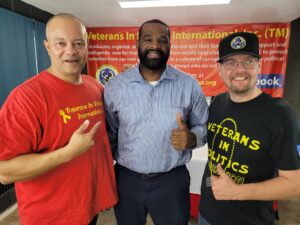 California state assembly members represent an average of 465,674 residents.  After the 2000 Census, each member represented 420,000 residents.

Elize has a degree in finance who currently works for the Los Angeles County Department of Health Services.

The host had a deep discussion on “Sanctuary Cities”, many topics of discussion were brought to the surface.

Please click on the link below for more information on Getro Elize: