You are here: Home / Home - Featured / Is the LVMPD controlling the murder rate to protect tourism dollars in Las Vegas? 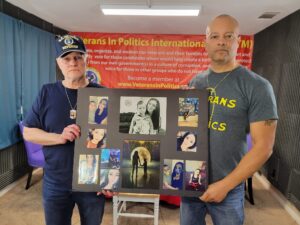 Air Force Veteran describes the LVMPD covering up the Death of his Daughter!

Veterans In Politics video internet talk show interviewed Thomas Leener as he speaks about his daughter’s senseless death and coverup.

Leener said the police were contacted several times when his daughter complained to the police that her boyfriend Michael committed Domestic Violence (DV) and the officers did absolutely nothing and made attempts to coerce her into changing her complaint.

Leener said that someone broke into his daughter’s home and attacked her when she entered and caused her to lose her unborn child by being kicked in the stomach. Leener continued to say that his daughter’s boyfriend asked her many times to get an abortion.

During the interview, Leener skips around from one event to the next. The Host tried to keep him on track, but it’s understandable for this to happen. It is unnatural for a parent to bury a child.

The day of the arrest:

Leener said the officers arrested his daughter for DV and Michael the ex had no visible marks, nothing to support DV.

Leener tells the emotional events of his daughter’s death he explained that he and his wife found her deceased in her bed.

Leener explains that his daughter has been a victim of both domestic violence and sexual trauma for over several years unannounced to him.

Leener said he and his wife is not allowed to see his grandchild.

Rachel Brooks text message recovered from her phone after her death written on September 23, 2020:

My name is Rachel Brooks, I’m almost 33 years old. I’ve been a resident of Las Vegas for 28 of them. I have a 5-year-old little boy named Lennox. If you know me you know my child is my everything, heart, and soul. His perfect smile and sweet voice would brighten anyone’s day. He calls me his “best friend”.

He’s been wrongfully taken from me by his father as of Saturday, September 19th, 2020. Lennox’s father was on my property, in my home when he attacked me, I had to run for my life, he took my phone/keys and wallet. I had to get into a car with a stranger in a nearby parking lot and have them drive me to the safety of my family’s home as I’m pregnant with his second child currently. For the last two months, I wholeheartedly thought we were working on our family but he had been cheating on me the entire time knowing I was pregnant.

I returned to my home where the police were and they kept me in the direct sunlight on a curb for 45 minutes until I asked to go back into my home in the air conditioning. I explained my position and that I was frightened. That Lennox’s father was asked to leave and he was threatening my life and unborn child’s life.

The police did not care. His father told the police that I hit him. They interrogated me for hours, they went to draw a gun on my stepfather when he tried to come near me. 5 male metro police officers including the sergeant from the Spring Mountain station was sent out because the 4 original cops had no idea what to do, they had no actual proof of anything as I showed back up to my home as they were already here and that Lennox’s father did indeed hurt himself.

These police officers ganged up on me for hours, an 80-pound pregnant woman, and treated me like absolute garbage. Lennox’s father should have been in trouble for trespassing on my property and for stealing my belonging and putting his hands on me as well.

They did nothing to protect me. They never even turned in my police statement as they left it on my countertop when they read my rights and cuffed me.

I was taken to jail, booked, and put in belly chains for 4 hours that were extremely tight around my stomach. I couldn’t breathe and expressed that multiple times. Or lift my hands above my waistline.

Normally one would be moved to the second process area faster but due to extreme overflow and low staff, the process moved at the rate of a snail. I was given a box of food with no water. People asked for water and they told them to drink it from the toilet sink in the bathroom.

Covid guidelines were also not being followed. No social distancing, in fact when I was moved into the second processing area everyone was forced to sit on top of one another in two rows when they had 5 rows available for each man and women area seating. No soap in the bathrooms or hand sanitizer to prevent the spread and everyone was drinking from the same water fountain and sharing the telephones.

My bond was posted immediately. People in CCDC had been sitting in the same spot for days for all different charges. And stuck in the system because of overflow. Thankfully at the 12-hour mark due to my health state at the time my family was able to have me released as the jail at that point had taken a urine sample and knew that I was pregnant. And having pain in my female areas and stomach. That I was dehydrated, and an increased heart rate and not a healthy blood pressure as they did not have an actual doctor on property.

This whole traumatizing event was an injustice and unlawful from start to finish. –end-

We need justice for Rachel Brooks may she rest in peace!

Click on the link below and watch this emotional video: 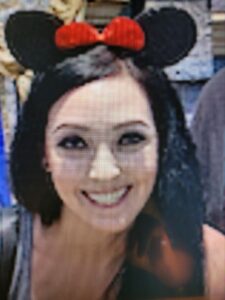 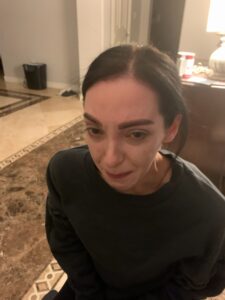 Hero Cop Founder of the Wounded Blue Randy Sutton!Sharelle Mendenhall runs for US Senate said to protect our Borders, our Children and support our Troops!