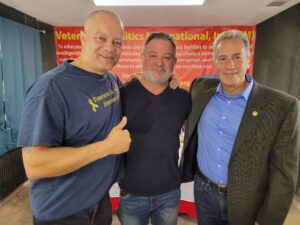 Sutton was a Princeton New Jersey Police Officer for 10 years, he was a Detective when he moved to Las Vegas, and 24 years with the LVMPD a total of 34 years with Law Enforcement.

While on probation with the LVMPD Sutton was involved in his first officer-involved shooting with a 15-year-old gang member who had his weapon pointed directly at Sutton. Sutton fires and the round hit the wall and the shooter gave up.

Sutton said the second shooting was a life-altering moment. Stan Hyt former LVMPD officer, our cohost said he was present during that shooting. Sutton continued to let us know what happened. Sutton said the shooter was in full tactical gear.

Sutton said he was close to the shooter that he kicked him, the shooter went down and came back up with the muzzle of the weapon pointed directly at him.

Sutton said they both fired at the same time and the shooter fired at him. Sutton said during the exchange of gunfire his weapon jammed. The shooter continued to shoot while he rolled around on the ground to avoid being shot.

Sutton said other officers started to fire on the shooter while rounds were moving over his head. Sutton said the shooter had 43 gunshot wounds and he was still running towards him, the shooter was deceased at the scene.

Sutton said his third shooting was an armed robbery while he was a sergeant. Sutton said he shot at the ground and the perpetrator stopped in his tracks.

Sutton’s fourth shooting was while he was undercover with a federal task force. Sutton said the perpetrator ran over his partner and his partner was plastered on the windshield of the vehicle. Sutton opens fired with a 12 gauge shotgun. The perpetrator is now doing five life sentencing.

Sutton said the last shooting was suicide-by-cop as the Lieutenant in charge Sutton gave the order to his fellow officers to shoot to save the life of a woman and child.

Sutton said Administrative Leave should be changed to Critical Incident Leave because it stereotypes officers.

Administrative leave is a temporary leave from a job assignment, with pay and benefits intact. Police officers are routinely placed on administrative leave after a shooting incident while an investigation is conducted, without implying fault on the part of the officer.

Sutton speaks about other events:

Sutton has written several books as he tells his story about many life-saving incidents. Sutton tells his story while he was a Princeton cop he watched a man burn in his vehicle and he couldn’t remove the civilian from that vehicle. Sutton said that incident was more traumatizing than the officer-involved shooting.

Sutton had been assigned to many departments on the force. Sutton said he called it quits when he had a stroke in his patrol car in 2009.

Sutton said he is not afraid of dying, he is afraid of living.

Sutton said that the police department turned its back on him and refused to pay his medical bills.

Sutton said he went to the Sheriff and asked him why are you treating me like this? And the Sheriff said, “it’s not personal it’s business”. Sutton ultimately won his lawsuit against the LVMPD and his medical bills eventually were paid.

Sutton said after that many officers across the country came to him about similar stories, which lead him to form The Wounded Blue.

Sutton said his organization has helped over 12,000 law enforcement officers across the country.

Sutton, there was a policy with the LVMPD if you were injured on the job you would be assigned to light-duty, this was the compassionate thing to do. But the current Sheriff changed that and said if you are not able to go back to full duty in a year, you are fired.

Sutton tells how police departments across the country terminate officers and don’t pay their medical bills when they get injured on duty.

Each year, over fifty thousand American law enforcement officers will sustain injuries from the assault and on-the-job accidents ranging from minor to catastrophic. Most Americans assume that in the event of sustaining on-duty injuries, law enforcement agencies and the local, county, and state governments that employ them would be responsible for taking care of them, financially, medically, and psychologically as these injuries are incurred while serving the people they swore to protect.

Officers who are injured, often lose a major portion of their salaries during their healing process (if the injuries are only temporarily disabling) and also lose the ability to earn enough to feed their families. That is why The Wounded Blue exists to correct this injustice by fighting for our injured law officers.

Donate to a Great Cause The Wounded Blue: