You are here: Home / Endorsement Interviews / Sharelle Mendenhall runs for US Senate said to protect our Borders, our Children and support our Troops! 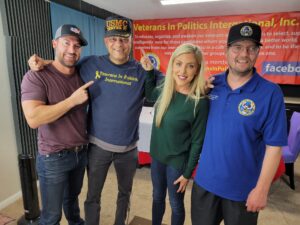 Mendenhall requested that we start the show off in prayer, which was unusual but gratifying on the birth of our US Marines.

Mendenhall said she owns talent agencies and owns a foundation called Mend-A-Nation because she believes in self-sacrifice.

An extremely passionate, intelligent, and compassionate about the residents of our state.

Mendenhall feels that the current situation in Afghanistan was a slap in the face to all military veterans and that our country current administration forced top-ranking military officials to betray their trust in the Afghanistan citizens.

Mendenhall said that these Afghanistan allies vowed to take a stand against their country’s corruption and to help America fight the war against terror.

Mendenhall added that this is a disaster to our countries credibility and place the lives of these allies on their death bed.

Mendenhall said the issue with our elected politicians is that they have no loyalty nor honor to the American people.

The Host chimed in and express how important it should be that our US President have military experience if they are going to accept the title as Commander-in-Chief of all US forces.

Mendenhall’s stand as a US Senator:

Mendenhall said she is a person that gets things done and if she can’t do it she will find someone in her administration that can.

Mendenhall replied that she is not looking for notoriety, she is looking to fix the problem and challenge problems that are disruptive to our nation adding “don’t keep quiet about it”.

The Host asked how would you change the opposing party’s mind?

Mendenhall said that she would show how it would relate and benefit their state.

Mendenhall added that at no time would she compromise her integrity.

Mendenhall also believes that an investigation should take place in the exiting of Afghanistan.

Mendenhall’s plan to keep Veterans out of prison:

The Host spoke about a question that he said to Mike Pence when he was a candidate for Vice President. The question was what would a Trump-Pence Administration going to do for the thousands of military veterans that are serving time in both federal and state prisons? And continued by saying that we should treat our veterans for their aliment instead of constantly incarcerating them!

According to the 2016 census, there is an estimated 107,400 veterans are serving time in state or federal prisons.

The host asked Mendenhall to respond to the same question.

Mendenhall said that she would go to the root of the problem and also help with the veteran’s suicide rate.

Mendenhall said that she knows a great deal about how to treat mental illness, she complimented her mother for being a Mental Health Therapist.

Mendenhall said it’s not a quick fix but we need to have a “Reintegrating Program” that would guide the military serviceperson back into society six months before they are scheduled to be released from the military in addition to educating veterans on the programs that are available for them. To let the military members know that there is hope and we will help guide them that’s what we need to do as a society.

There are currently reintegration programs for prison inmates that also help them get job training and these programs currently exist for homeless veterans. But no preventive maintenance to help veterans on their way out of the military.

The host explained the Veterans Treatment Court (VTC) here in Nevada and asked if this should be a federal program.

Mendenhall explained that each community is unique and she would have to do a study to make sure that this program is well versed in helping all the veterans in every state, but overall it’s a great program cutting down on the incarceration rate amongst our brave men and women.

Are veterans no different than anybody else?:

The host reminiscence a memory he had recently when Steve Wolfson Clark County District Attorney made a statement that “veterans are no different than anybody else”.

The host asked Mendenhall what she thought of that statement. Mendenhall asked the host to repeat himself to make sure she heard it correctly.

Let us be clear a Combat Veteran is constantly in the fight, day in and day out seeing the worse behavior a person could do to another for months up to years for some. Receiving no downtime, no counseling, that are doing it for love of country.

These veterans all left their families going across the globe not for vacation, not for schooling, not for a new job but for keeping this country free from destruction. By that allowing others like District Attorney Wolfson to sit in judgment of others.

The host continued by saying only a person that never served would be arrogant enough to make a statement like that.

Mendenhall said that if she heard him the District Attorney or anyone making a ridiculous statement like that, that she would immediately confront them and remind them why they live in a free nation and advice them not to disrespect our veterans.

Mendenhall said that she would suggest that the District Attorney go back and read up on American history and what our military had to go through and continue to go through to keep our nation free.

Mendenhall closed and said that people need to vote as their lives depend on it no matter what seats are being voted on and added 2022 elections are vital and we must be educated on the candidates and issues moving forward. 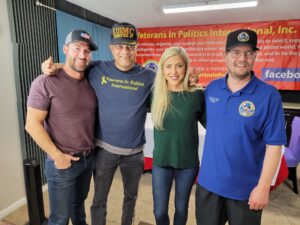 Please click on the link below to learn more:

Bill Hockstedler Airforce Veteran said he is running for US Senate to represent all Nevadans!