You are here: Home / Home - Featured / Bill Hockstedler Airforce Veteran said he is running for US Senate to represent all Nevadans!

Hockstedler is a straight shooter! 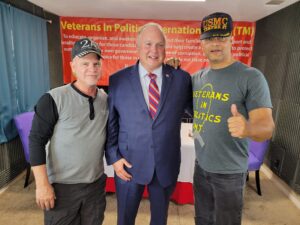 The host asked Hockstedler if he would support federal approval of marijuana consumption to ensure that banks can start accepting the money and the Veteran Administration can start prescribing it to our Veterans that are now hooked on pharmaceutical opioids.

The host asked about term limits on US Congress, US Senate, and federal judicial appointments. Hockstedler agreed on term limits and added that no term limits cause corruption.

Hockstedler said that the vaccine mandates should be a personal choice not forced on the American people. The host gave a personal encounter of receiving vaccines in the military that didn’t start to show side effects until 12 years later and was never noted in the service member’s medical record.

The host asked if Hockstedler would draft a bill to make American Samoa and Puerto Rico a state. Right now both of these US territories have congressional representation in committees but not on the floor of congress. Hockstedler believes the balance of power is fine the way it is.

Hockstedler said I am you, I am the average person I have no skeletons in my closet, not like some of my opponents!

Please click on the links below to learn more about William Hockstedler.

Vote Bill Hockstedler for US Senate