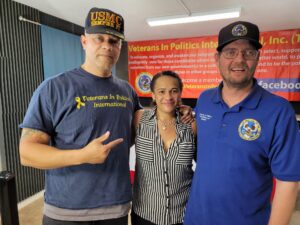 Veterans In Politics video internet talk show interviewed Keanna List as she explains how corruption exists in her case. List is the mother of 4 children and has two separate cases.

List explained that Child Protective Services under the Department of Family Services told her that she has to take a drug test.

The Host explains that only “Criminal Judges” have jurisdiction to order drug testing. The Host continues to explain that Family Court is a Civil Court, not a criminal court!

List explains that Joesph Gloria a Department of Family Services (DFS) caseworker told her and her ex that List is not allowed to see her children and if she did try to pick up her children at her court-ordered time for List’s ex to call the police and if he didn’t comply they (DFS) would prosecute him as an unfit parent.

The Host explains that if DFS wanted to change the court order they would have to bring the matter before the court and convince a judge to change the order not arbitrarily change it on their own.

List explained in her other case that her ex has multiple felony convictions of Domestic Violence with strangulations. In one of the cases List showed the scars on her arm where her bone broke in two places after she was tossed off the bed by her ex (SEE BELOW). 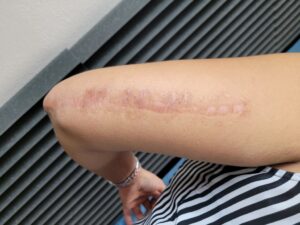 DFS refused to consider the Domestic Violence and gave the abuser ex the right to tell List if she could see her children or not.

List filed a complaint with Gloria’s supervisor and she said they stand by the Case Worker’s decision.

The caseworker is supposed to be neutral but they disregard the mother and help the father.

List said she had a video of her ex manipulating DFS, List explained DFS disregarded the video evidence.

DFS told List ex to disregard the Court Order signed in Family Court ruled on by Judge Bill Henderson. DFS overruled the judge’s court order, this is contempt of court, and List constitutional rights are being violated.

List also explains that the police were called and the police would not tell her ex to bring the child outside so that the mother can exercise her court-ordered visitation.

List also explained the DFS took her son out of her home and gave her child to her ex who is living in a house the City of Las Vegas deemed condemned.

The Host reached out to Joseph Gloria Jr. who is the son of the Clark County Registree Joseph Gloria Sr. and asked him point-blank “have you ever told a litigant to ignore a judge’s court order” and he responded, “it depends”!

Sharelle Mendenhall runs for US Senate said to protect our Borders, our Children and support our Troops!Bill Hockstedler Airforce Veteran said he is running for US Senate to represent all Nevadans!