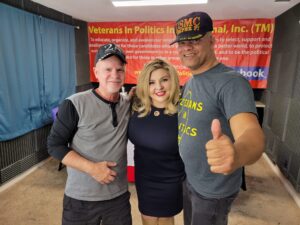 Fiore said she did polling before she decided to run for Governor. Who are currently the state’s Republican National Committee Woman, former Nevada Assemblywoman, and former Las Vegas Mayor Pro Tem.

Fiore said that she has always stood side by side with Las Vegas Mayor Carolyn Goodman to keep business open and stop the mask mandates.

The special co-host asked Fiore about her colorful background and Fiore answered each question head-on. This shows how Fiore is not afraid to answer uncomfortable questions and stand by her convictions. The host said when the media comes after you that means you are shacking it up.

What we need in the Governor’s Office is a strong Republican Governor, not a “wishy-washy Republican” said Fiore.

Fiore said my mother is a Democrat and she is heading up “Democrats for Fiore”! Do you think that these democrats are going to stay silent in the General Election against Sisolak?

It sounded like Fiore was getting ready for the General Election.

The host asked if Fiore would support a bill that would give Nevada voters a choice to retain or remove incumbent judges.

Fiore tells what separates her from her male challengers:

Fiore went after Gubatorial candidate and Clark County Sheriff Joseph Lombardo and stated that he has made it mandatory for all police officers to get vaccinated, he has ruined the relationship with Immigration and Customs Enforcement (ICE). Fiore continued and said that he has problems with the second amendment, problems with the October First shooting, and problems with “hugging and kissing” Steve Sisolak current democratic Governor. The host said he heard that Lombardo was placed in this race to assist with Sisolak for a second term, but Fiore said she heard that as well but, Joe’s ego is too big to do that.

Fiore said that Dean Heller former US Senator and Gubernatorial candidate is a “Never Trumper”!

Fiore continued with John Lee North Las Vegas Mayor and Gubernatorial candidate said that Lee didn’t have the testicles to stay as a registered democrat and run against Sisolak in the primary.  Fiore continues by saying instead Lee switches his party to run as a Republican.

Fiore ended by stating that Steve Sisolak Democratic Nevada Governor will beat himself. That we have a Governor in the office that was a Tellermarketer and got his money from suing Clark County and marched with Black Lives Matters against the police. Fiore added that Sisolak refuses to shake a military man’s hand a colonel in uniform.  The Host added that he has his own experience with the Governor not communicating.

Fiore said the Governor’s seat is not for sale!

Fiore said that she will lift the vaccine mandates and made a very strong argument and added that it should be a choice.

Fiore said she would end Critical Race Theory being thought in our schools, that it would continue to divide America on race. Fiore said that her blood type could help any human being that needed it.

Fiore said she would end voter fraud by removing the “mail-in ballots” and antiquated machines. Fiore said that she is for “voter identification”. We can’t do anything in this state without an ID, but nothing for voting!

Fiore said talk to me about policy, not personality!

If elected Fiore would be the first woman that would have the title “Nevada Governor”.

Please click on the links below for more information on Michele Fiore:

Bill Hockstedler Airforce Veteran said he is running for US Senate to represent all Nevadans!Keenan SOS candidate said “We have to fight the culture of corruption”