The Great State of Nevada 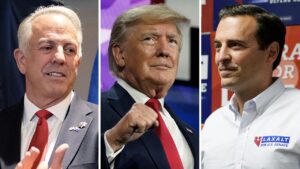 I am truly amazed by the two candidates that won their primary election for United States Senate and Nevada State Governor.

The Republican State Party Recommendation Committee for pre-primary endorsements choose Adam Laxalt for Senate and Joe Lombardo for Governor, leaving the other candidates off the list of recommendations.

The establishment pushed the Laxalt and Lombardo agenda and former US President Trump endorsed both candidates.

Overwhelming the Republican Party “Doers” did not want either candidate, and both candidates get criticized at events.

The Republicans that are unconscious of what is going on, (the silent minority) voted to put these two candidates in office.

I am so confused as to why this has happened. Both the State and County Republican Party preach to the missives and say that the Democrats are destroying our way of life and we should cast out all the RINO’s (Republican in Name Only) party members and then they turn around and do a complete 180. So much for the pep talk!

Adam Paul Laxalt was Nevada’s 33rd Attorney General, what had he done when he was sitting in this seat? Laxalt ran against Steve Sisolak for Governor and we all know how that went. Now Laxalt is running for a more powerful seat and a more powerful competitor against Catherine Cortez Masto who is loved by her party. Masto received over 90% in her primary in a five-way contest if you include “none of these candidates”. Plus the “ME TOO” movement is in strong effect. Why would the Republican Party want to push Laxalt who is an opportunist against a more powerful candidate? Many would say that Laxalt ran off of his grandfather’s name ID who was a former US Senator.

Joseph Michael Lombardo is currently the 17th Clark County Sheriff. Now, Lombardo needs to give Clark County residents and Veterans In Politics praise for indirectly getting him the position of Sheriff.

During the Stanley Gibson shooting saga. Veterans In Politics pushed the issue of how the Las Vegas Metropolitan Police Department (LVMPD) shot and killed an unarmed Army Veteran who was suffering from Gulf War Syndrome and Post Traumatic Stress Disorder (PTSD).

We went to Carson City and persuaded the Legislatures to destroy the More Cops Bill. The Legislatures sent this bill back to the Clark County Board of County Commissioners for a resolution. This bill would be used to raise property taxes to increase more police, at least which was the argument to get the bill passed. Veterans In Politics and many Clark County Residents were against this idea. We ended up destroying the More Cops Bill with the help of Steve Sisolak then Chairman of the Board of Commissioners.

Then Sheriff Doug Gillespie was so infuriated with the outcome decided that he would decline from running for a third term after he had already publicly stated he would. This is how Joe Lombardo came into play.

Since Lombardo’s tenure in office many questions are unanswered such as; where is the 1 October Mass Shooting money, why didn’t CSI (Crime Scene Investigation) a branch of the LVMPD do ballistic testing on the rounds found in the bodies of the victims to the weapons found in the shooters Mandalay Bay hotel room, why is crime at a record high of 49%, why does Lombardo insist on pre-questions screening, why doesn’t Lombardo show up to events, and why is Lombardo so arrogant?

But the best question ever is why Lombardo donated thousands of dollars to Steve Sisolak in his last campaign to help him become Nevada’s Governor against Adam Laxalt?

Many Republican Doers cannot consciously vote for US Senate nor Nevada Governor in this General Election, therefore the power of these two seats remains in Democrat control.

I truly believe this is what the establishment predicted and want!

Candidate for Nevada Governor, Joey Gilbert, is not conceding. Gilbert has filed a lawsuit contesting the election.NORTH LAS VEGAS: How are we going to vote for a Mayoral Candidate who can’t fill the Oath of Office?

Bill Hockstedler Airforce Veteran said he is running for US Senate to represent all Nevadans!