You are here: Home / Home - Featured / NORTH LAS VEGAS: How are we going to vote for a Mayoral Candidate who can’t fill the Oath of Office?

Can She? Questions arise if

*Updated at 3:05 pm to include full names of Jessica Sferrazza and Dwight Dortch.

A Nevada Supreme Court ruling from nearly a decade ago seemed to make clear how municipalities across the state would interpret a term limit initiative that passed into law in 1996. However, an attorney representing the City of North Las Vegas has taken a different stance, advocating for the right of incumbent councilwoman Pamela Goynes-Brown to appear on the upcoming ballot as a candidate for North Las Vegas mayor, going so far as to send her legal opinion to the Secretary of State election’s division.

While acknowledging that there had been no “direct” inquiry from the state to her on the issue of the potential term-limited councilwoman, NLV city attorney Micaela Rustia Moore confirmed that the question of Goynes-Brown eligibility had been raised multiple times, which prompted her to weigh in on the matter, unsolicited, to the Secretary of State. 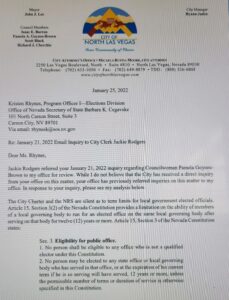 In a letter dated January 25, 2022, and addressed to Kristin Rhynes, Program Officer I – Elections Division, Rustia Moore was plain-spoken in her stance on the matter writing, “According to the language of the Nevada Constitution, and the Nevada Supreme Court’s interpretation thereof, Councilwoman Pamela Goynes-Brown is legally eligible to run for North Las Vegas Mayor in the 2022 election.”

The Supreme Court case which Rustia Moore referenced, written in 2014, was brought about by a court challenge to the Nevada term limit statute and its application to the office of Reno Mayor. Two potential challengers for that role, both who had served all or parts of 12 years in their seats, one a former city council member and the other who had been currently serving on the council, were prohibited from running.

In authoring the opinion for the majority, Justice James Hardesty wrote, “Thus, based on the provisions of the Reno City Charter, we conclude that the Reno mayor is a member of the ‘local governing body,’ subject to the same limitations that apply to the other city council members.” Hardesty then deemed that serving on the city council and/or as mayor were looked at the same under the law when it came to the term limits, “Accordingly because (Jessica) Sferrazza and (Dwight) Dortch each will have served on the Reno city council for 12 years by the end of the current term, they are ineligible to be elected as Reno’s mayor.”

In her letter to the state, Rustia Moore addressed what she felt was the difference between the Lorton v. Jones, which was the Reno case, and North Las Vegas election question, writing on official city letterhead, “While the City’s Charter appears to distinguish the offices of Mayor and Councilmembers under Sections 2.010 and 2.015, the Nevada Supreme Court, in the case of Lorton v. Jones, 130 Nev. 51 (2014), compared North Las Vegas’ City Charter to Reno’s City Charter in the sense that the Mayor is a member of the Council and the Council is the local governing body of the City; thus, the two positions of Mayor and Councilmember are both parts of the governing body. Id. Therefore, the positions of Mayor and City Councilmember are likely not two distinguishable positions on the local governing body of the City, and serving for 12 years or more in one of these positions would preclude the same person from running for the other position.”

Upon being reached for comment about the possibility of a challenge to Goynes Brown’s candidacy, Kristin Rhynes, the recipient of Rustia Moore’s letter referred Political tips to the Secretary of States’ Public Information Officer for a statement. In asking generally what course of action would prompt an official inquiry relating to accusations or complaints covering election, campaign finance, and ballot questions in Nevada, Rhynes referenced the Election Integrity Violation Form which can be found here.

As the race intensifies, and with the deadline to file to run for North Las Vegas Mayor approximately one month away, questions will continue to swirl about Goynes-Brown status on the ballot until clarification of the Councilwoman’s right to run becomes official. In addition to Goynes-Brown, two other current elected officials, Senator Pat Spearman and Regent Laura Perkins have both announced their intent to vie for the mayorship as well. Goynes-Brown is also attempting to join Spearman and Perkins in making history, An election victory by any of them would be the first time an African-American would be guiding the city of North Las Vegas.

Neither Councilwoman Goynes-Brown nor City Attorney Michelle Rustia Moore responded to a request for comment.

Can She? Questions arise if Councilwoman Goynes-Brown is eligible to run for North Las Vegas Mayor?