Jennifer Bandiero candidate for Nevada’s Board of Regents District 13 and Clark County Family Court Litigant, was outraged with her 6-year-old daughter Sophia at the hands of former Clark County Family Court Judge Cynthia Dianne Steel, who is also a Republican candidate for Nevada’s Congressional District 1 on the Veterans In Politics Video Internet talk-show. 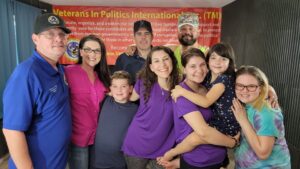 A Message from Jennifer Bandiero:

DONT VOTE FOR CYNTHIA DIANNE STEEL -IF YOU WANT TO SAVE NEVADAS CHILDREN AND ULTIMATELY OUR NEXT GENERATION- The corruption matrix will just continue. She has no regard for life or children she stated multiple times (about my beautiful rainbow baby) – “ I wish I had a time portal so I could go back to the day before conception and make better decisions before that next move – Oh gee I wish I hadn’t had that child” … well, why don’t you tell all of us how you feel about our next generation?! The time is NOW to change Nevada – ultimately change our country!

This IS THE REASON I am running in this election! To be an advocate for ALLLLLL students pre-k through college graduation. I’ve personally seen the pain, torment, crisis, and devastation this generation is being put through at the hands of career politicians and I won’t stay silent! I won’t. We need an educated generation who can take on America!

NORTH LAS VEGAS: How are we going to vote for a Mayoral Candidate who can’t fill the Oath of Office?Veterans In Politics International Endorsement 2022