You are here: Home / Endorsement Interviews / Controversial talk show host Brian Shapiro tells it as he sees it! 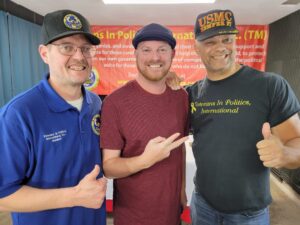 Shapiro said; “if it wasn’t for our Veterans I wouldn’t be able to have an opportunity to be an idiot on the radio”.

Shapiro has been on the Las Vegas airways for the past 20 years and he is not afraid to have face-to-face conversations with people, but social media has given people a tool to cowardly harras and defame people without looking them in the eye.

Shapiro scrutinized several talk show hosts and indicated that Howard Stern is the reason why he became interested in becoming a radio host.

Shapiro said that he is a middle ground between the right and the left-wing politics.

In a 90 minute interview, we saw the inside of Brian Shapiro, we don’t agree with everything that was said, but we are willing to listen and exchange ideas.

Family Court Attorney said to the Judge: “That’s Domestic Violence is that the order of the COURT!”Native Born, Veteran, and Fighter for Nevadans Mack Miller runs for Lt. Governor!