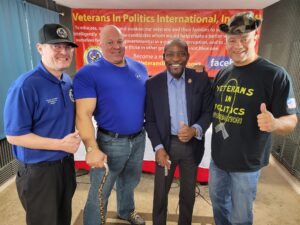 Miller said he would use the weight of the Lieutenant Governor’s Office to help out in other areas that are failing our state.

Fix education to attract out of state business:

Miller said the school district has failed Nevadans for years, he continues by saying; “how can we attract new business to Nevada, if we have a failing school system”?

Miller continues on the school district, “how can we call parents terrorists because they are involved in their children’s education”?

Turning small businesses against each other, by virtually deputizing small business owners to do Office for the Coordination of Humanitarian Affairs (OCHA) requirements by having their employees engage with private citizens’ health issues.

Mack Miller’s take on candidates in the Lt. Governors race:

Miller said as a native-born Nevadan he loves and believes in our state and we can not continue to allow it to go down this path without a different way of helping Nevada.

Miller said he has been on welfare and now he is successful, that he can relate to most Nevadans struggles. Miller said that he was court-martial for bullshit, but yet nobody talks about the Nevada Attorney General Aaron Ford’s arrest. The hypocrisy in politics has to stop!

We need to get our economy back by untieing the hands of business owners.

Miller said if anyone reaches out to him and said that they have a problem “Mack got your Back”!!

Miller will close by saying; “if you are a refugee from another state and you ran away from that state because you didn’t like what’s going on there, don’t bring it here!”

The Nevada lieutenant governor has five (5) statutory duties. These duties include chairing the state tourism commission; serving on boards related to transportation, economic development, and audits; and ensuring continuity of government in a catastrophic emergency.

(a) Determine and announce publicly when conditions have normalized within this State or the portion thereof affected by the
catastrophic emergency.

(b) In cooperation with the Secretary of State, develop procedures and a reasonable schedule for filling by regular election the various offices filled temporarily according to this section.” (NRSS 239C. 260)
-END

Please click on the link below to view the interview: