You are here: Home / Endorsement Interviews / Family Court Attorney said to the Judge: “That’s Domestic Violence is that the order of the COURT!”

In a video hearing on December 15, 2021, at the Clark County Family Court House. We can finally prove that Family Court Judge Bryce Duckworth doesn’t know his Job! 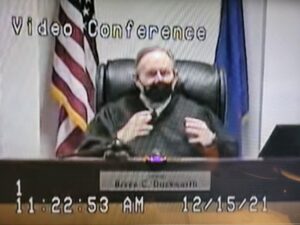 Duckworth asked longtime Nevada attorney Louis Schneider “what should I do?!”

Schneider goes into great detail on how the Guardian-ad-litem Michelle A. Hauser in the Lovelady matter violated several court orders of Judge Duckworth.

Duckworth cannot enforce a court order to save his life!

Schneider does mostly criminal law and understands the constitutional rights that should be followed.

Family Court Judge Bryce Duckworth does not and calls himself a registered Republican.

On December 15th a tax-paying citizen; Steve Sanson the President of Veterans In Politics International (VIPI) requested to enter the people’s courtroom to simply observe.

Judge Bryce Duckworth’s Marshal told Mr. Sanson that he was not allowed to observe because it is a Sealed Case!

Sanson told the Marshal that the case is not sealed, but the Marshal continued with the lie and now the entire Lovelady case is on the Veterans In Politics Youtube and the case that Sanson was kicked out of has over 1,571 views and counting.

Schneider had filed a request that the case be sealed but it was never ordered by the court. The Court Clerk told the Judge that in theory this case should be treated as a Sealed case.

The case was then ordered by Judge Duckworth to be moved to a Breakout Session,

which is legalized for a conference between two parties. If the Judge had never ordered the case to be Sealed then in fact the Marshal lied to Mr. Sanson.

By lying to Mr. Sanson that the case is sealed is a violation of our Constitutional Rights, Nevada Revised Statutes, and the Judge’s Code of Conduct.

Duckworth was aware that a court observer is being kicked out on a case that was NEVER sealed and he sat and did absolutely nothing!

The legal doctrine that holds an employer or agent if such acts occur within the scope of the employment or agency, is called Superior Respondent! Sorry, to add another legal phrase, It’s not your job’s to know that but it is the job of Judge Duckworth, his Marshal and Family Court to know!

Voters you need to know your job and that is to educate yourself and stop electing corrupt officials like Family Court Judge Bryce Duckworth! Who ran unopposed in the last election, because Nevada attorneys have no gonads to run against this corrupt judge.

Violation of the most fundamental constitutional right you have been granted in this country and that is the ability to follow up on our elected officials!

Constitutionalist Brenda Flank seeks to be a fresh face on the LV Council Ward 4!Controversial talk show host Brian Shapiro tells it as he sees it!