You are here: Home / Uncategorized / City Council Race turns up the heat as more information surfaces!

Early voting for the City Council Seat in Ward 3 (#earlyvoting)  will run from October 22 through November 4th.

Here is why it is imperative that you vote for Carrie Cox Henderson City Council 2022.

The Henderson Police Department is hemorrhaging officers, is in disarray and the Chief is not qualified, nor fit to run the department. https://www.youtube.com/watch?v=Xi2Q2vHywEw

The Chief is constantly spreading false narratives to the citizens of Henderson. Spewing incorrect crime statistics is only one instance of his unbecoming behavior. https://www.reviewjournal.com/…/victor-joecks…/

The city council as it stands now is a disgrace. The present Mayor, Debra March, has run both the City and HPD into the ground.

Ask yourself, why a newly elected Mayor is involving herself with endorsing any candidate in an effort to determine and control the outcome of an election.  Shady deals going on!

Nash will be an automatic “yes vote” for everything the Mayor puts in front of her. Her goal for Henderson is not to protect our city or to help our First Responders, Nash wants to develop, and overdevelop our city.

In fact, the first seven-story apartment building in Henderson is already on the drawing board to be built next to the “Loan Shark Arena” in the heart of Green Valley. Yes, Nash was one of the people who pushed the arena to be built in a neighborhood where 3,300 residents signed a petition against it.  Not only is this kind of development the wrong direction to be heading in, but it will also adversely affect residential property values in the area. 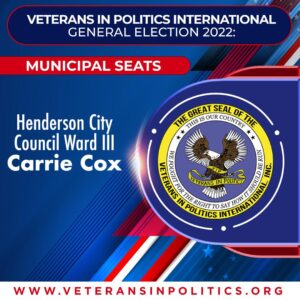 You may want to ask yourself why someone that makes a million dollars a year in real estate would already have spent over $685,000 on her campaign, to have a $50,000+ a year job.

Something is wrong with this picture because this math doesn’t pencil. Is Nash trying to win a local Henderson City Council race, or the real estate jackpot of a lifetime? https://www.nvsos.gov/…/Anonymous…/ViewCCEReport.aspx…

The Las Vegas Review-Journal uncovered that Nash has been arrested for a DUI.

Nash told the reporter that it was:” a mistake that she had made when she was a young professional”… and that, “she had taken full responsibility for her actions.”

And can we trust Nash? She has a habit of spreading misinformation about our Public Safety and claiming and inferring she has endorsements from veterans and police officers, she doesn’t have. https://youtu.be/R2n7l-pymFs

The election for the City Council seat in Ward 3 is a David and Goliath story between the rich, self-serving commercial real estate agent that will spend any amount of money to get elected.

And Carrie Cox, the 32-year public servant, and underdog school teacher endorsed by local first responder heroes, that is fighting the good fight.

Cox wants Henderson to flourish and shine. She wants a safe city for all of us. She will work full-time for us as a city council member. She is a mom, wife, friend, and grandmother. Family and community are important to her.

Cox has shined a light on the deceptive acts of not only the present City Council but of the Chief of Police and doing that has made her a target of both. Transparency is important to her.

Victor Joecks’ of the LVRJ said today and I quote –

“Carrie Cox is running for Henderson City Council and is sounding the alarm on decreasing public safety. Henderson has a long and well-deserved reputation as a good old boys club. A Cox victory would shake things up and could force the city to be more forthright about rising crime”.