You are here: Home / Uncategorized / Should the mental health of a Judicial Candidate be a concern for a District Court Judge? 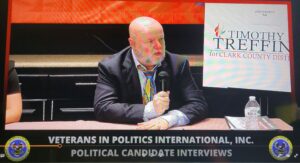 Panel member Stephanie L. Phillips explains to the candidates how they research the candidates before interviews and find information sometimes worthy of questioning.  Phillips asks Mr. Leavitt about a report she saw online regarding an alleged attempted suicide back in 2018 and whether or not it was true.  Mr. Leavitt responded it was “shocking” that someone would even ask him about a personal matter of mental health.  Leavitt says he was not under the influence of alcohol or drugs when the gun ‘accidentally was discharged’.  Mr. Leavitt went on to say he was very depressed and in a state of despair at the time after having lost four family members to suicide.  Leavitt explained how he caused a lot of pain to a lot of people during that time in his life, but he’s “back” now and he’s better.  Leavitt seemed extremely agitated with the question and claims somehow this personal medical information of mental health falls under the Health Insurance Probability and Accountability Act (HIPAA); however, HIPAA applies to Doctors not revealing medical information about their patients.

The Health Insurance Portability and Accountability Act of 1996 (HIPAA or the Kennedy–Kassebaum Act[1][2]) is a United States Act of Congress enacted by the 104th United States Congress and signed into law by President Bill Clinton on August 21, 1996.[3] It modernized the flow of healthcare information, stipulates how personally identifiable information maintained by the healthcare and healthcare insurance industries should be protected from fraud and theft, and addressed some limitations on healthcare insurance coverage.[4] It generally prohibits healthcare providers and healthcare businesses, called covered entities, from disclosing protected information to anyone other than a patient and the patient’s authorized representatives without their consent. With limited exceptions, it does not restrict patients from receiving information about themselves.[5] It does not prohibit patients from voluntarily sharing their health information however they choose, nor does it require confidentiality where a patient discloses medical information to family members, friends, or other individuals not a part of a covered entity.

A judicial candidate changes her name to trick voters to become a Judge!The Media Covered up the story on the Clark County Public Administrator’s Domestic Violence!