You are here: Home / News / Military Veteran and 25 years Ret. Police Lieutenant Ignored and Marginalized by the City of NLV and State of Nevada

Wilson “Wil” Crespo was Honorably Discharged from the United States Air Force after serving 4 years as a Military Police Officer. Then, in 1990, Crespo joined the North Las Vegas Police Department, and he retired with Honor as a Police Lieutenant after serving the citizens of the City of North Las Vegas for 25 years. 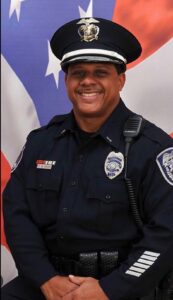 October 2022 has marked 3 years since Retired Lieutenant Crespo filed his worker’s comp. injury claim. Fighting to have a heart and lung claim processed for more than 3 years is absurd.

If the claim is denied and appealed, NRS 617.457 directs the Nevada Division of Industrial Relations (DIR) to conduct an investigation if the appeal exceeds 6 months to resolve. As of the writing of this article, Wil Crespo will have been waiting for his claim to be paid for almost 1200 days.

The City of North Las Vegas continues to marginalize Ret. Lt. Crespo by acting as if their hands are tied and he has been ignored by the City through their 3rd party administrator, Cannon Cochran Management Services, Inc. (CCMSI). They have sharpened their skills over the years when it comes to legitimate claims. Instead of processing the claims of police officers who have become injured and disabled while employed, they have used their time and energy to learn how to manipulate the NRS to create an environment riddled with delay, stalling, passing the buck, and gaslighting anyone who tries to make progress on their claims. All with the intent to avoid paying legitimate claims.

Does this sound like Insurance Fraud or misuse of the NRS? I guess we can find out…

Wil Crespo’s claim has been accepted and approved and he has prevailed on every denial issued by CCMSI. CCMSI and the City have been ORDERED to pay the claim by the State of Nevada Department of Administration Hearings Division {Rebecca Salazar, Hearing Officer}. DECISION AND ORDER: …”The Claimant was employed as a police officer for (nearly) 25 years, until his March 2015 retirement. The determination of the Insurer is hereby REVERSED/REMANDED. The insurer shall issue payment of Permanent Total Disability (PTD) benefits calculated using the average monthly wage at the time of the Claimant’s retirement.” IT IS SO ORDERED this 23rd day of August 2022.

The City believes that it can hide behind the veil of a 3rd party administrator, but we all know that the City is just trying to create distance between its questionable decisions and the victims.

Ultimately, the City, the Elected, the City Management, and the City Legal Team are going to be responsible for the mistreatment of Veterans and Retirees. A clever plan, but easily unveiled.

The City of North Las Vegas and CCMSI still to this day outright refuse to process and pay the claim. The law (NRS) is clear that Ret. Lt. Crespo had earned this Injured Worker Benefit and the Hearings Officer confirmed this in her DECISION.

The City of North Las Vegas is grossly wasting the North Las Vegas Citizens’ tax money by fighting cases that they know they cannot win and they are well aware that in the end, the City will ultimately have to pay the claim.

So ask yourself, why would the City use internal and outside legal counsel to fight fights that they know they cannot win only to have to pay after a long, costly legal battle? Job security? Ego? Pride? Politics? Racism? Keep in mind, the City and the Police Department have several pending minority discrimination cases.

The Nevada Division of Industrial Relations in part is tasked with ensuring that claims are processed properly and in a timely manner. Since you cannot sue the Insurer in this State, the law provides an “Exclusive Remedy,” DIR. If an Employer or Third Party Administrator violates the Claimant’s rights or violates the provisions in the Statute, the DIR can assess “Benefit Penalties (BP).” For example, with regard to a Heart and Lung Claim, the Claimant can receive a BP of up to $200 a day from the time the Claimant Appeals the denial to the time that the Claimant prevails on the Appeal.

In Wil Crespo’s case, that amounts to approximately 800 days. If you are calculating, yes, that is about $160,000 in BP’s. And, the Claimant can get up to $50,000 in BP’s every time they prevail on an appeal. Wil Crespo has prevailed at least twice and he is about to prevail again. Doing the math? – in excess of $300,000 in BP’s not including the claim.

You may be asking yourself, ‘why would the City and the 3rd party administrator risk $300,000 in penalties on a claim that they know for a fact, they cannot win?’ Maybe the attorneys, internal and outside counsel realized that they can make a lot of money by fighting claims they cannot win for many years. Then, lose anyway knowing they were going to lose. Maybe because it’s not their money? Yes, it is the citizens of North Las Vegas’ hard-earned tax money that is being abused and squandered to fill the coffers of the attorneys and the 3rd party administrators. Not their money, why should they care?

To the City and the 3rd party administrator, Wil Crespo is not a Military Veteran that served with Honor for 4 years. He is not a Retired Police Lieutenant that spent 25 years protecting and caring for the citizens of North Las Vegas that retired with Honor. To them, Wil Crespo is just a number, a cost, a calculation that is disregarded with all of the sociopathic horrors that go along with the powerful doing harm to good people.

This dismissiveness and the disregard that employers like the City of North Las Vegas and their “undercover” agent, CCMSI have for Police Officers and Military Veterans that have served with Honor, Integrity, Compassion, and Loyalty to the public Is reminiscent of how the Military and the public used to view Veterans.

Veterans literally had to die in the Waiting Room in order to get public attention to the problem. These Veterans were denied the benefits that they earned with their service for many years and they were treated with the same dismissiveness and disdain as today’s retired police.

Will Ret. Lt. Crespo have to have a heart attack and end up in the hospital in order to bring attention to this problem in the State of Nevada or will he have to die for something to be done?

Why do they refuse to act? What’s in it for them?