You are here: Home / News / A rebuttal; State GOP Chair targeted in an RJ article! 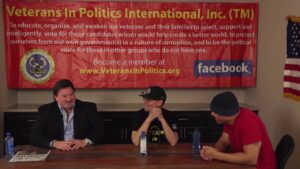 In my opinion, the one-sided story told about McDonald influenced me to write this article.

I first met McDonald at a Las Vegas City Council meeting in late 2003.  McDonald has a nonsense type of personality trait and the weak-minded have an issue with it.

What the article is attempting to do is discredit and isolate McDonald by dividing an already fragile party.

The article didn’t mention that McDonald took over the party after three state party chairpersons didn’t even complete one term as chairman before they resigned.

In their defense, they didn’t realize the psychological toll this leadership position can be. In addition, the constant chaos within the party because of efforts made by turncoats attempting to infiltrate the party at all costs.

The article hardly mentions the success that McDonald has had as Chairman. In this recent election with his leadership, he was able to obtain turn three constitutional seats (50%) and one of those seats is the removal of a Democratic incumbent Governor.

If anyone has forgotten the State Governors’ seat is the grand prize. If you don’t believe me Google the powers a State Governor has. That alone deserves huge congratulations to McDonald and his team.

Let’s not forget the reelection of Nevada Governor Brian Sandoval, Republican control Assembly and Senate during the leadership of McDonald.

We can’t blame these losses solely on the doorsteps of McDonald.  Every campaign team also has a part to play in the succession and defeat of their candidate.

McDonald already made history, as the longest-serving patriotic Republican Party Chairperson, and with that constant service comes knowledge and experience.

Why would anyone want to replace someone that gives his heart and soul to a voluntary position to ensure his political values are not destroyed, given his efforts by leading his state’s party?

McDonald’s has taken on much nonsense that has wasted your taxpayer’s dollars these nemesis falsely involving McDonald in constant investigations only orchestrated to unseat him.

McDonald’s has moved through every accusation and turmoil unscaled. This would lead any clear thinker to ask the question “What are they scared of?”

We might not agree on everything but McDonald is the perfect hallmark of a great leader.

I applaud every Republican no matter what your State is, support a true patriot Michael J. McDonald.

For More Information; please click on the links below:

Some in Nevada GOP call for McDonald, Fiore to step aside