You are here: Home / Uncategorized / The Episode “Death in a Vegas Motel” from Unsolved Mysteries on Netflix Reveals More than Police Want the Public to Know!

The episode from the latest season of the revival of the hit TV show was released on Tuesday, October 25th, and reveals information that calls into question the “official story” behind the death of a beloved Las Vegas personality. 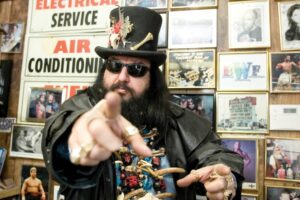 The revival of the hit television show, Unsolved Mysteries, on Netflix has recently released an episode titled “Death in a Vegas Motel.”  The show explores the mysterious death of wrestling promoter, auto mechanic, and local Las Vegas personality James “Buffalo Jim” Barrier in 2008.

Law enforcement treated Barrier’s death as a simple overdose of cocaine and closed the case, concluding there was no foul play.  Now, 14 years later, Barrier’s family has unearthed new information that was never disclosed to the public or news media; this is information that brings the official story by police into question.

“Death in a Vegas Motel” discusses the new information behind Barrier’s death.  It also highlights some of the suspicious activity that was occurring in his life before his death.

Some of these instances were:

And once you’ve watched the episode on the new season of Unsolved Mysteries on Netflix and want to know more, visit www.buffalojimbarrier.com to learn more about the case.