You are here: Home / Endorsement Interviews / CITING DEDICATION TO CONSTITUTIONAL VALUES, THE HONORABLE RICHARD SCOTTI TO RUN FOR NEVADA SECRETARY OF STATE
Clark County Nevada
August 25, 2021
Longtime Nevadan brings decades of experience as a lawyer, business owner, and judge to the campaign. 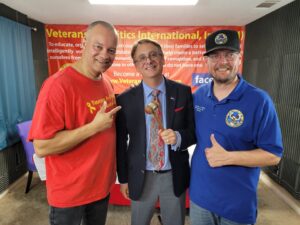 “With my decades of experience, combined with my passion to protect election integrity and our constitutional values, I am confident I am eminently qualified to serve as Nevada’s next Secretary of  State, and I intend to do my utmost to serve the people of our state in this vital role,” Scotti said.

“As Secretary of State, my team and I will be working hard to promote business growth in Nevada, to restore election integrity, and to defend the Constitution.”

Scotti, former District Court Judge for Department 2 of the Eighth Judicial District Court, has resided with his wife and two children in Nevada for more than 30 years. He has been a highly distinguished member of the state’s legal community since 1992. The national rating service Martindale-Hubbell has awarded Scotti! preeminent” status — the highest possible rating in legal ability and ethical standards. The American Bar Foundation has recognized Scotti as being in the top 1% of legal professionals.

Prior to winning his election in 2014 as District Judge for a six-year term, Scotti had been part owner of a successful law firm practicing complex business, commercial, real estate, and construction litigation, and administrative law.  He protected the people of Nevada by serving as a prosecutor, then general counsel, then administrative law judge for the Nevada State Contractors Board. Further, he represented the international contractor that built the Venetian Hotel Casino, and he was one of the lead attorneys on the longest civil jury trials in the history of Nevada.

The Nevada Supreme Court appointed Scotti to serve as a settlement judge for 10 years, where he helped reduce the appellate caseload, and as a foreclosure mediator during the Great Recession, where he helped Nevada citizens recover from the housing crisis.

The lawyers in Nevada elected Scotti to two terms as a Governor of the State Bar of Nevada beginning in 2010, where he managed all aspects of the legal profession. In that capacity, Scotti served as a liaison to the State Bar Committees on Publications; Audit; Personnel; Construction; and Energy, Utilities, and Communications.

Scotti has been passionate for his entire career about improving the level of honesty, ethics, and integrity in the legal profession. He led the way in marketing the Lawyer”s Pledge of Professionalism back in 1993. He volunteered his time as Regional Chair of the State Bar Fee Dispute Committee, helping to promote transparency and accountability in attorney billing. Scotti is exceptionally proud of his work as Chairman of the State Civility Committee, where he worked with Attorney General Adam Laxalt in developing the new oath of professionalism for new attorneys.

As a District Judge, Scotti tirelessly fought for the constitutional rights of all Nevadans. He protected the Las Vegas Review-Journal”s First Amendment rights to prompt access to Las Vegas Metropolitan Police Department records of the Oct. 1, 2017, mass shooting.

In the 2016 general election, Scotti was appointed to a special Judicial Election Team to handle emergency petitions. He has always vigorously defended the constitutional due process. During the culmination of his judicial term, Scotti upheld the fundamental doctrine of separation of powers in a ruling that reminded the Nevada Legislature that one cannot be both a lawmaker and a law enforcer.

About the Honorable Richard Scotti

The Honorable Richard Scotti graduated with high honors from Hastings College of Law in 1988 and has practiced law in a wide array of fields. Scotti also graduated cum laude from the University of Southern California with degrees in international relations and political science. Scotti earned the “Preeminent” rating, the highest possible rating in legal ability and ethical standards, by the profession’s leading national rating service. Prior to serving as District Court Judge for Department 2 of the Eighth Judicial District Court, handling both civil and criminal caseloads, Scotti excelled in the fields of construction law, business litigation, and administrative law. Scotti was elected twice by his peers to serve as one of the Governors of the State Bar of Nevada.  In that role, he managed all aspects of the Nevada legal profession.

Click here to view the video interview of Richard Scotti: