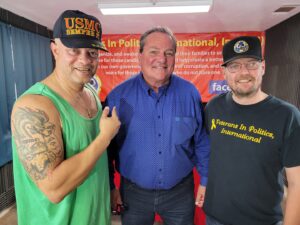 Schneider hails from Massachusetts has made Nevada his home.

Schneider has been practicing law for 17 years added that he has chosen family law over criminal law because in family law you can make a real difference, and in criminal law, most of your clients have done something wrong and you get them a soft landing.

Schneider has his own personal demons about the family court in Massachusetts.

Schneider said in family law he will not take a relocation case because it’s heartbreaking to take one parent from the other.

Schneider said in Nevada the judges have to reunite the parents by law, but we all know that’s not what happens.

Schneider said family court judges are the hardest working judges in the county.

Schneider kept repeating the judges look for the “best interest of the children”. The host repeatedly asks what does that means, but couldn’t get a straight answer.

The host brought up the issue that judges abuse their discretion, fail to follow the rule of evidence, and fail to follow Nevada Law and Federal Law. Schneider said he doesn’t see that in the courtroom.

The host wanted to know why the family court judge order litigants to get a drug test on pure allegations without any evidence to support the allegations.

The host pounded on the issue and said according to Nevada Law only a criminal judge can order drug testing of litigants and civil judges has no jurisdiction to make such an order adding that family court judges are civil judges not criminal.

Schneider added that former family court judge Cynthia Dianne Steel wouldn’t order a litigant to take a drug test because it’s a violation of their constitutional rights without probable cause and it’s a criminal court case matter.

Schneider said if you are ordered to take a drug test and you refuse, it’s deemed dirty.

The host said wait a minute if you stand up for your constitutional rights and the law, how is your lack of drug testing deemed dirty? The host said that judges are legislating from the bench. If they want to change the law they need to lobby the legislature for the law to change until then they need to follow the law.

Schneider said it’s the policy of the court. But here is the problem a court policy is not law!

The host brought up the 14th Amendment that gives you equal protection under the law adding if judges want to skirt the law they are no different than anyone else.

Schneider refuses to listen to the law by echoing the safety of children, in other words, you can violate the law if it’s for the safety of the children.

The host once again saying that is not the law, amend the law and stop violating the law. A family court judge cannot order a litigant to take a drug test.

The host suggested having a jury trial or a tribunal in family court when dealing with the relocation of children and termination of parental rights.

Schneider said that family court cases are complex and you can’t trust a jury to do that. The host pushed back and said wait a minute, in criminal court a jury decides prison or freedom, life or death, but a jury can’t make a decision on relocation or termination of parental rights, that is totally Ludacris!

The host said one person that has the power to take a child from a parent breeds bias and corruption.

Schneider said a jury doesn’t have the understanding about family court, but yet a jury can decide if you live or die. We still can’t make sense from what Schneider is trying to say he is basically telling us that juries are idiots.

The host brought up the fact that the Constitution said that a parent has a right to parent their children.

The host stated that mediation is mandatory under Nevada State Law. Schneider said he believes mediation is the policy of the court, but yet some judges don’t order litigants to go to mediation before trial.

Rena Hughes former disgraced judge who was sanctioned by the Nevada Commission on Judicial Discipline and the only sitting judge to lose her election in the primary. Hughes alienated a child from her mother, conducted ex-parte communication, threatened the 11-year-old child with jail, denied court observers in the courtroom, and a tyrant in a black robe.

Bryce Duckworth storms off the bench like a toddler, has predetermined a case without hearing any evidence, doesn’t enforce his own court orders, demonstrates bias in the courtroom, and is a total hypocrite.

Charles Hoskin puts his friends in Hearing Masters job positions by ignoring the votes of the majority judges, destroyed hundreds of elderly Nevadans lives even a documentary entitled The Guardians on Amazon showed how this judge reamed havoc on Nevada residents, he has the most letters for Against in the Nevada Commission on Judicial Selection history when he was attempting to secure the appointment to the Nevada Appellate Court.

Duckworth and Hoskin need to join Hughes at The Abrams Law Firm.

The host stated he has conversation from attorneys that feel threatened if they run against a judge, this is the reason why corrupt judges get a free ride by running unopposed.

The host stated that we have to find a way to remove bad judges by placing into law Remove or Retain. If a judge runs unopposed and Remove receives the most votes the seat becomes vacated, the Nevada Commission on Judicial Selection interviews candidates and sends three names to the Nevada Governor, from the three names Governor picks a person to fill the vacancy, and the following election year the person picked by the Governor runs for retention.

Schneider was giving praise to the Legal Aid Center of Southern Nevada for their pro bono work. The host fired back and said before they take your case you have to be destitute out on the streets and if it’s pro bono work why does the judge order the other side to pay for the opposing parties’ pro bono attorney?

The host suggested the name pro bono needs to be changed to something else because pro bono means free.

Schneider said the Nevada State Bar beats up on one-man operations but refuses to go after established law firms.

The host brought up the fact that attorneys walk-off cases without notice abandoning the litigant in the courtroom and the judges allow this to happen. Schneider said that this behavior is against the law.

The host said if we keep turning a deaf ear and a blind eye to the corruption in our courtroom, it becomes normalized.

Schneider said he doesn’t see any corruption in the courtroom and he loves all the judges on the bench.

Schneider said that he takes offense when the host says the family court is corrupt.

The host said that the federal law protects a veteran’s disability benefits but some family court judges believe that they are entitled to take it from them.

The host said corruption has many faces, many items make a judge corrupt not just cash payments.

The host wanted to know why litigants are considered to be vexatious when attorneys are just as bad or in some cases worse but yet they are not considered vexatious by the court. In addition, this is a violation of their constitutional right to be heard in a court of law.

Vexatious is used to shut the litigant up!

Schneider said all it takes for evil to triumph is for good people to do nothing!

Click on the link below to watch the explosive and informative interview: