You are here: Home / Home - Featured / Vietnam 5 tour combat veteran gets screwed-over by a Family Court Judge tells his story 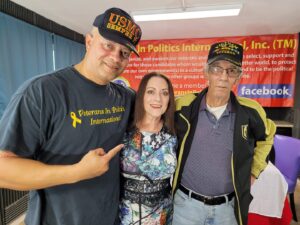 When Veterans In Politics first started to take a hard look at family court in 2016, many asked us why.

Our response is the Clark County family court has constantly ignored the federal law that protects Veterans Service Connected Disability Benefits which cannot be counted as income and levy in any way. But civilians who never served will never understand that concept. Our veterans are not above the law, but they never asked to be disabled while serving in our country’s military.

We as a nation owe this debt to our veterans who put themselves in harm’s way to protect our freedoms and way of life.

Conte was given one of the worse family court judges Sandra Pomrenze and he paid the price.

A little history on Pomrenze she was caught telling a Black American litigant that she needs to cut her daughter’s “nappy hair”. Below is the link:

Pomrenze is a biased and rude judge who loves to hear herself talk. Pomrenze denied Dr. Robert Medoff and his wife visitation of their granddaughter who they have raised for 8 years. This would be considered a “civil death”.

Judge Pomrenze knew that she wouldn’t survive reelection so she graciously decided not to run for reelection. Instead to our surprise, she was added to the Senior Judge List as a reward for doing such a great job on the bench. I think  NOT!

Senior judges handle about 20 percent of the total district and appellate caseload. By taking senior status, even if maintaining a full caseload, a judge creates a vacancy on the court, to be filled by the nomination and confirmation process of Senior Judges.

Now back to Conte:

Conte served over 20 years in the military and suffered from Agent Orange which gave him life-threatening cancer. Conte is now 100 service-connected disabled veterans.

Conte tells his story on how he was currently married to a Japanese woman and a Philippine woman fraudulently made a marriage certificate including him as her husband while he was stationed in the far east.

Conte finally divorced the Japanese woman and the Philippine woman shows up with a marriage certificate that was registered 9 days before the actual marriage date.

Conte said that Pomrenze discussed his case off the record in a closed-door meeting in the judge’s Chambers without his presence.

Conte said that he had no documentation to prove that he wasn’t married to the Phillippine woman and Judge Pomrenze accepted the fraud marriage document. Conte argued that the marriage certificate was registered 9 days before the marriage date and his military orders didn’t put him in the Philippines on the date of marriage.

The host asked if the case was sealed and France said that it is sealed but it’s completely deleted from the Clark County District Court website as if it never existed.

(c) Sealing of entire court file prohibited.  Under no circumstances shall the court seal an entire court file. An order entered under these rules must, at a minimum, require that the following information is available for public viewing on-court indices: (i) the case number(s) or docket code(s) or number(s); (ii) the date that the action was commenced; (iii) the names of the parties, the counsel of record, and the assigned judge; (iv) the notation “case sealed”; (v) the case type and cause(s) of action, which may be obtained from the Civil Cover Sheet; (vi) the order to seal and written findings supporting the order; and (vii) the identity of the party or other person who filed the motion to seal.

But judges and attorneys do it every day, Just asked Attorneys Marshal Willick and Jennifer Abrams it’s a normal practice to violate this rule without any consequences.

France said that Conte’s attorney received a document from the Philippine government indicating that the marriage between Conte and the Phillippine woman never existed and presented the document to the court.

France continued by saying that Pomrenze dismissed the document because the spelling of Wayne Conte’s first name was misspelled with an (i) instead of a (y).

France continued by stating that Conte’s attorney removed himself from the case 3 weeks before trial and Pomrenze never allowed Conte to find new counsel. Instead forced him into representing himself. Which is against our US Constitution’s 6th and 14th Amendments.

Conte had no idea how to represent himself. Pomrenze sets up Conte to fail and award his fraudulent wife $1,000 per month in alimony for 15 years. There were no children involved in this court case.

Conte’s new attorney never did an Appellee to the Nevada Supreme Court because he recently was disbarred. So the 30 days statute of limitations lapsed.

In September 2020 Conte filed a lawsuit in Federal Court against Pomrenze and the State of Nevada. The case is currently in discovery. Conte is suing for $100 million.

Conte refuses to pay the alimony because they weren’t married.

Conte first filed suit against Pomrenze in the Eighth Judicial District Court and was denied by Senior Judge James Bixler instead Bixler awarded the opposing attorney Richard Crane with the Willick Law Group $4900 in attorneys fees.

Crane was temporarily suspended from practicing law by the Nevada Supreme Court after he pleaded guilty to one count of sexually motivated coercion with a minor. Richard L. Crane a member of the Willick Law Group, which focuses on family law was sentenced to five years probation by District Judge David Barker.

Conte speaks about how Richard Crane became involved with his case on the opposing side. Conte indicated that all of his money is protected by federal law.

In 2019 Crane files a Writ of Execution to take $16,414.32 against Cont’s bank account which had Conte’s disability payment.

Conte filed a motion to stop the garnishment on his bank account. Pomrenze told Crane not to file the Writ of Execution against Conte’s bank account but Richard Crane violated the judge’s orders and did it anyway and never returned the money to Conte. No consequences were ordered on Crane.

Now the family court is attempting to put Wayne Conte on the vexatious litigant list. This will stifle his rights to defend himself and chill his free speech. A violation of his Sixth Amendment. How unconstitutional is this?

Conte said since the Willick Law Group has taken over the case as opposing counsel he had his apartment and vehicle broken into with documents scattered.

Conte said Crane has a restraining order against him because he wrote a letter to Crane saying that he will get fucked!

Conte is now looking for a reduction in alimony because the Phillippine woman is making 20% more than his disability payments.

Now Judge Mary Perry is on the case. Whoopee! 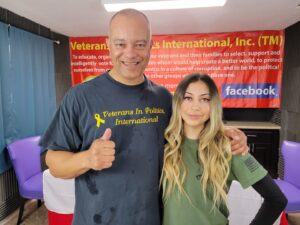 Afghanistan we need accountability!Stan Hyt 30 years with the LVMPD entered the race for Clark County Sheriff!