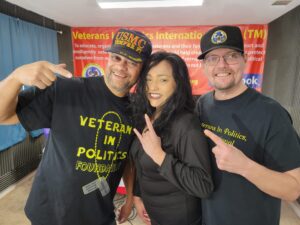 Veterans In Politics video internet talk show interviewed Mabel Lozano as she discuss the corruption within an Orange County courtroom.

A single working mother of two claims that the family court system is a complete nightmare.

Lozano claims that the father of her children abandoned the family to drugs.

Lozano claims that the Family Court Judges act more like parents and not as a judge.

Lozano stated that her medical condition enabled her at times with no family support.

Lozano stated that her sister stole her child by deceiving the court and taking custody of her son.

Lozano goes into great detail about how she lost her child.

Watch the compassionate video below:

Life-long Democrat and talk show host switch political party!A JUDGE said there are no Due Process Rights in my courtroom!