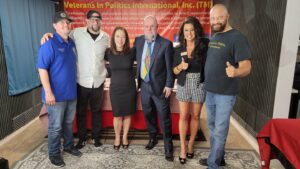 Both candidates introduced themselves.  Judge Gall is the daughter of a Korean immigrant and a US Army Veteran.  Judge Gall was appointed by Governor Sisolak to this seat and is running to retain the position.  Mr. Leavitt began his introduction with an announcement he has filed with the Nevada Judicial Discipline Commission (which was to be made public Thursday, August 4, 2022), where he outlines that a “well-known consultant” contacted Mr. Leavitt and told him if he didn’t withdraw from this race a “negative campaign ad”, which Mr. Leavitt claims is defamatory and was used against him four years ago then history would repeat itself.  When asked by panel member, Stephanie L. Phillips, what was in the commercial Mr. Leavitt answered by saying if you want to get a copy of the complaint it would contain the information about this commercial.

Panel member Vem Miller asks both candidates why they want to be a Judge.  Leavitt says he just turned 60 and he has 30 years of experience as an attorney. He believes experience is very important which qualifies him to be a Judge.  Judge Gall seeks the seat because she loves the State of Nevada and this community.

James Jonas asks the candidates about judicial temperament in the courtroom.  Both candidates state it is important for judges to act kindly to litigants in the courtroom.  Mr. Leavitt explained how he “changed his party affiliation and is now registered as a non-partisan”.  Leavitt says “Judges should be non-partisan” and be balanced as to their views while in the courtroom. He asks how can you have equal justice if you’re affiliated with a certain Party.  Some would say Mr. Leavitt violated the rules when campaigning for a judicial seat as judicial candidates are NOT allowed to state their party affiliation unless specifically asked and Mr. Leavitt was not asked which party he was registered with.

Panel member Stephanie L. Phillips explains to the candidates how they research the candidates before interviews and find information sometimes worthy of questioning.  Phillips asks Mr. Leavitt about a report she saw online regarding an alleged attempted suicide back in 2018 and whether or not it was true.  Mr. Leavitt responded it was “shocking” that someone would even ask him about a personal matter of mental health.  Leavitt says he was not under the influence of alcohol or drugs when the gun ‘accidentally was discharged’.  Mr. Leavitt went on to say he was very depressed and in a state of despair at the time after having lost four family members to suicide.  Leavitt explained how he caused a lot of pain to a lot of people during that time in his life, but he’s “back” now and he’s better.  Leavitt seemed extremely agitated with the question and claims somehow this personal medical information of mental health falls under the Health Insurance Probability and Accountability Act (HIPAA); however, HIPAA applies to Doctors not revealing medical information about their patients.

The Health Insurance Portability and Accountability Act of 1996 (HIPAA or the Kennedy–Kassebaum Act[1][2]) is a United States Act of Congress enacted by the 104th United States Congress and signed into law by President Bill Clinton on August 21, 1996.[3] It modernized the flow of healthcare information, stipulates how personally identifiable information maintained by the healthcare and healthcare insurance industries should be protected from fraud and theft, and addressed some limitations on healthcare insurance coverage.[4] It generally prohibits healthcare providers and healthcare businesses, called covered entities, from disclosing protected information to anyone other than a patient and the patient’s authorized representatives without their consent. With limited exceptions, it does not restrict patients from receiving information about themselves.[5] It does not prohibit patients from voluntarily sharing their health information however they choose, nor does it require confidentiality where a patient discloses medical information to family members, friends, or other individuals not a part of a covered entity.

Leavitt says just because something is reported on the internet does not give one the right to ask about it; however, when running for public office your whole life is public and nothing is off the table.  Voters need to know their candidates and need to properly vet candidates.  The questions asked of the candidates are to give them a voice to answer and tell their side of the story.  It appeared Mr. Leavitt did not appreciate this opportunity to answer such a question and hopes it is never brought up again during his campaign.

Both candidates were asked about Veterans Treatment Court and believed it should be free of charge to the Veteran when they can’t afford the program. The interview was closed out with Vem Miller talking about access to equal justice by litigants who can’t afford attorneys and that they should be able to walk into a court Pro Se and be able to have equal access to justice.   Mr. Leavitt said that everyone should have “justice for all” even if they represent themselves. Judge Gall also believes it’s a problem where a lot of people can’t afford an attorney and she doesn’t have a perfect solution to this problem. Gall explains there is a civil self-help law center where there are forms and instructions for certain kinds of cases to help Pro Se Litigants. Gall says there needs to be more advertising about this service so people know it exists and is available.

It gives us great honor that Veterans In Politics International voted to ENDORSE JUDGE MARIA GALL.