Veterans In Politics International, Inc. have been educating the public on candidates running for elected seat since 1992.

In 2013 we decided to investigate the Clark County Family Court Judges after several military veterans complained that judges were violating federal law by using “Service Connected Disability Benefits” as a tool to pay for alimony and child support. Under federal law, these benefits are exempt from any levy, taxes, judgments, and bankruptcy. We were also told that judges were also violating another federal law “Veterans Service Members Relief Act” meaning no court could proceed on cases if an active duty member of the armed forces were on orders in another jurisdiction. After conducting our investigation we found that this was indeed true and during the 2014 elections we campaigned against these judges and they were removed from office.

Fast forward to 2016 several military veterans along with our first responders, members of the Las Vegas Metropolitan Police Department and prominent attorneys told us that Family Court Judges were violating both Federal and State Constitutions, Nevada Revised Statutes, Judicial Cannons and Code of Ethics, based on multiple members of the community echoing the same violations of the law the Veterans In Politics formed Court Observers to sit and watch the judges, view the videos and read court transcripts. After reviewing these violations of the law we decided to observe the Family Court every week and found out that many judges were indeed violating the law and their own code of ethics.

Many judges complained about a heavy workload, but not work a full 40 hour work week. Many judges totally disregarded a pro-se-litigants right to be heard and supply evidence. If a litigant files too many documents they are now deemed vexatious, if a litigant voices their argument they are told to shut up and sit down, and threatened with contempt. If a litigant is pro-se the judges do everything in their power to make a litigant hire an attorney. Judges are kicking pro-se-litigants out of their courtroom and conducting ex-parte communication with the other side. Judges are having pro-se-litigants who can’t afford to hire an attorney, pay for the opposing party’s attorney. Judges are not following the rule of evidence, they rule on hearsay arguments basing their ruling on whoever has the best and convincing storyline.

Some of these family court judges are biased bringing their religion to the bench, favoritism one attorney over another or over a pro-se-litigant. Judges were also canceling hearings and failing to inform the litigant making the litigant lose time from work, placing their children in daycare just to return to court without a hearing. These judges are having the opposing attorneys write the orders and not forwarding it to the pro-se-litigants for review, returning the order back to the judge for signature and on many occasions what was said at the hearings is completely different than what’s writing in the signed order. Some judges fail to recuse themselves after they hire an attorney that is also appearing before their court. Some Judges perjured themselves on Financial Disclosures and get away with it.

Family court Judges are Civil judges and they are ordering drug and alcohol testing of litigants only Criminal judges have jurisdiction to order these testing. Judges are making litigants pay child support after it was discovered that the litigant is not the child’s father. Judges are forcing litigants to pay for a third party entity such examples are guardian-ad-litem, psychological evaluations, supervised visitations at Donnas’ House, ankle bracelets and interlocked devices for drugs and alcohol and if you don’t pay your half of these bills some judges would hold your child as ransom given you ZERO contact with your child until you pay your half of the bill. These judges are assuming the role of debt collectors. Why can’t the litigant’s medical insurance pay for most of these third-party entities instead of using a handpicked judges list?

These Family Court Judges are financially raping the litigants causing many of them to have emotional and physical health problems, many have nowhere to turn. They are not educated in this field and don’t have the financial means, many are destitute and alone. Some judges don’t inform litigants about mediation.

The Veterans In Politics International is so tired of trying to let the judges know that they are wrong on a lot of these case, we formed two YOUTUBE Channels to educate the public on the travesties of family court. A video is worth a thousand words. We also protested the family court several times to bring attention to this long overdue issue. That many of us turn a blind eye and a deaf ear.

Instead the judges retaliate they started to arbitrarily lock their courtroom doors, abuse the sealed cases and closed hearing laws, instruct their deputy marshal to be adversarial towards us, have the media print negative stories, create an illusion that we are the bad guy, have attorneys file suit against us, anything to shut us down. These judges and their attorney friends conspired against our group by creating social media pages to use as a tool to discredit our exposure of their criminal behaviors.

Many of them believe that they are above the law and intimidate litigants on a daily basis. These judges would also intimidate and pressure other judges, by telling them not to participate in any Veterans In Politics activities and if they do, they would make their life difficult as judges and campaign against them in the next election.

Many of our members have no faith in the system especially the supposed watchdog of the judge’s the Judicial Disciplinary Committee who’s board members are all attorneys that for the most part protects the judges and immediately dismiss cases without any investigation and that is the same with the Nevada State Bar who is supposedly the watchdog group for practicing attorneys. This system is beyond broken and many of us shy away from it, casting blame on the messenger instead of trying to fix the problem.

The Veterans In Politics have been endorsing judges since 1992 and part of our requirements is to participate in Judicial Selection Committee Hearings, Judicial Disciplinary Hearings, The Investiture of a Judge, Graduation of Specialty Courts, Judges Campaign Parties, and Meet Your Judge Mixers.

Our President Steve Sanson purchased a ticket to the May 7th to the event “Meet Your Judge Mixers” and was immediately banned. Why is he banned? Is it because his organization is exposing corrupt family court judges and they cannot handle the pressure?

In an email from the Clark County Bar Association Executive Director, Donna Wiessner, stating the following; “this is a private event. Your registration and ticket purchase has been refused and your PayPal account is refunded”.

It’s funny how it’s a private event to exclude certain individuals. But they are inviting the public to participate and purchase a ticket. This event should be banned and all voters should request a full refund. 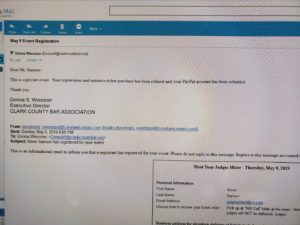 We encourage all of you to get involve in the next election and vote these corrupt judges out of office in 2020!