You are here: Home / Home - Featured / Hypocrisy within our Judicial System 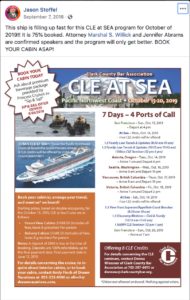 Veterans In Politics International has been observing a certain courthouse racketeer for years… A family court attorney who promotes his CLE classes (Continuing Legal Education) on cruise ships, he writes how-to books on family court, he’s the “QDRO master” (Qualified Domestic Relationship Orders) of child support (https://qdromasters.com/), he brags about writing the court rules (NRPC), he’s a pro-tem referee in North Las Vegas Municipal Court, and of course, let’s not forget his corruption of the judicial election process and intimidating adversaries through his social media troll group “Nevada Court Watchers” (NCW) and his “NCW PAC” which is a front group to hide his participation. But, this “man”, Marshal Willick proclaims not to be a “public figure.” 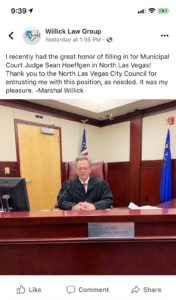 Attorney Marshal Willick appears before Judges, he trains attorneys appearing before those judges, he takes part in the creation of the rules of conduct for the courts which those judges must follow, he himself sits as a judge, and he has the judges and any would-be candidates for judge on notice that if they do not tow his line, he will unleash his online proxies and puppets to defame, intimidate, dox, and harass them. This is just part of how Marshal Willick makes millions by gaming the system, exploiting vulnerable and desperate people, and perverting the intent of Sargeant – and this is a huge part of the problem with the family court – a major conflict of interest…

Both Willick and his “fiancé” Abrams will use their knowledge of the law to abuse it, they will whine “CONFLICT OF INTEREST!” if you have taken a photo with a judge or interviewed a judge. But what about them? What about their many conflicts of interest? An activist doesn’t get paid, but a lawyer does.

Rumor says that the fake profile used on the Nevada Court Watchers page “Matthew Butcher” (https://www.facebook.com/matthew.b.206), is actually Willick. It is one of many sock puppet profiles on NCW used to harass and intimidate Willick’s adversaries and anyone that dare challenges the racket Willick has engineered. Whether Butcher is actually Willick is irrelevant. At least one of the sock puppet accounts on NCW is Willick.

Here is some of the influence handed down by these attorneys:

At 1:21, there was an objection made by the chairman not to allow exhibits to be admitted referring to letters writing in support of Judge Rena Hughes referring to the letters made by Jennifer Abrams and Marshal Willick.

Judge Bryce Duckworth and Marshal Willick making appearances on the radio together to talk about how they, possibly the two most corrupt colluders in Clark County Family Court, investigated themselves and found that there was no wrongdoing and announced it to the public. Laughable.

The Abrams & Mayo Law Firm has made many appearances in many cases before Judge Rena Hughes for example case number D-19-601052-F is still an active case before Judge Hughes, but don’t you dare look for the case because it’s sealed. Many cases that are represented by Willick or Abrams are “sealed” as if they never existed. The cases are completely wiped out of the computer. Why do you ask? They will use the best interest of the children as an excuse, but why not just seal that, why seal the entire case? The answer to protecting the wrongdoing of the Judges and Attorneys.

We need to take back our family court! We as a society cannot and should not allow this abuse to continue to plague our judicial system. We need people to start stepping up and say that enough is enough and take a strong stand on family court judicial reform. The time to act is NOW!

These are just some of the many conflicts of interest these two attorneys and their counterpart judges are allowed to get away with. They hear no evil, speak no evil, and see no evil attitude that needs to be a thing of the past!

The same set of rules should be followed by all, not just the privileged who are well connected with the judges.