You are here: Home / Endorsement Interviews / Judicial Candidate for District Court has BLOOD on her hands! 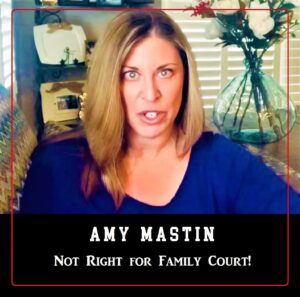 Mastin passed the Nevada State Bar in 1994.  In 1996, she was a law clerk for Judge, Gerald W. Hardcastle.  Before becoming a Hearing Master, she was a Clark County Family Violence Commissioner.

Mastin’s peer group has harsh words for her.  Some attorneys had critical sentiments, including one attorney who stated: “She is always angry and takes it out on the litigants.”  Another attorney stated: “Her demeanor is an area she has a challenge with.”

One attorney stated that he personally witnessed her berating a female litigant in TPO (Temporary Protection Order) court.  Mastin apparently told the woman that she should have investigated whether her ex-husband was going to hurt her (or not).  But this just sounds crazy!

BLOOD on the PAVEMENT

Then there was the Vietnamese couple.  Back in 2015, the couple was in Clark County Family Court.  For several years, there was constant physical abuse from the father.  There was documented choking, by the father, of the 14 and the 9-year old children.

The mother successfully obtained several TPOs against the father; these TPOs were granted by other judges (not Mastin).  And then the matter came in front of Master Mastin.

Remarkably, Master Mastin DENIED a TPO for the mother!  Although it’s unclear exactly why…

And then, one bright sunny day in June 2016, the father straight-up killed the mother in front of Walgreens.  A terrible tragedy.

The father then went to the home where his three children were living.  The father killed all three children—and then he committed suicide.  This numbs the senses; it’s all terribly sad.

The bottom line is that Amy Mastin should be nowhere near families or children.  Period!  She is responsible for the death of the mother, the three children, and the father who never got the help he needed.

IN HER OWN WORDS

The most damning thing about Amy Mastin, you guessed it, is “Amy Mastin”.  In her own words, Master Mastin explains—

“Personally, I’ve been a single mom, I’ve been divorced, I have a stepson, I have an excellent relationship with the father of my children, and a challenging one with the mother of my stepson.”  (Say What’?)

How come Mastin gets to disparage her ex’s spouse?  Shouldn’t Mastin be bridled by a prior restraint of speech—cleverly disguised as “behavior” order?

Mastin explains, “Both personally and professionally, I have lived the gamut of family court tragedy, so to speak.  You’d be surprised how valuable that experience is to a family court judge.”

Hasn’t Mastin had enough family court drama for one lifetime?  It’s kind of like devoting one’s life to perpetuating Holocaust drama after having been a victim of Holocaust drama.

One thing’s for sure—Amy Mastin has blood on her hands.  She is responsible for the death of a mother and her three kids, along with a father who never got the help he needed.  Why?—because Mastin doesn’t care.  She’s too busy immersing herself in the self-indulgence and debauchery we call “family court.”

Lynn Hughes, on the other hand, is a stand-up candidate.  Hughes is “in it” to “win it!”  And that’s why Veterans in Politics, International supports Lynn Hughes for Clark County Family Court Judge, Dept. “M.”