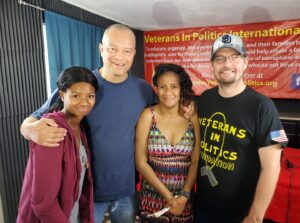 Veterans In Politics interviewed two sets of mothers fighting for their children within the Clark County Family Court System. Our organization has interviewed a Grandmother Patricia Holmes who holds a Power of Attorney over the minor child and the biological mother of the child Cinnamon Haynes.

Patricia Holmes stated that this system has put her life on hold. Holmes indicated that she has no criminal record, no drug nor alcohol abuse, and no CPS (Child Protective Services) reports. Holmes stated that Judge Lisa Brown has constantly violated her family’s constitutional rights and abused her authority. Sounds familiar?

The biological mother Cinnamon Haynes 22 years old told us when she first heard about her 4-month-old daughter that was taken by Police Officers, she passed out on the bus.

Holmes stated that the Officers refused to show her any court order and banged on her door like she was a criminal.

Haynes stated that the police took her child on baseless and empty allegations from the father. We asked Haynes if she is diagnosed with any drug, alcohol, mental illness, violence, neglect, she answered no on all counts.  Haynes said all the question she answered no to is the opposite of the biological father.

So what really led the police to take her 4-month-old child that was being breastfed at the time from the only home she knew?  No one knows!

Grandmother and mother fighting for their child in front of Family Court Judge Lisa Brown. 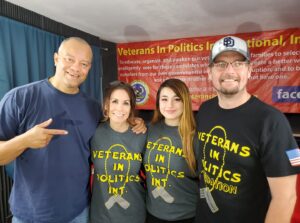 In this case “the mother” Cassandra Gutierrez is astonished how a family court judge would allow her ex-husband Seth Gutierrez who is a Clark County Deputy Public Defender to constantly allowed to abuse the system.

Judge Cheryl Moss forced the mother to move from Centennial Hills to the other side of the valley in Henderson uprooting the entire family to live by the children’s father Seth Gutierrez. Moss used her position on the bench to instill fear into the heart of the mother, by risking the custody battle of her children if she fails to comply. Moss allowed the Deputy Public Defender to file motions after motions granting each one and never considered to order the father as a vexatious litigant. Not to be dismissive or repetitive but the mother stated that her constitutional rights are constantly being violated.

This mother committed no crime, raised her 20-year-old daughter Jules McArthur (from a prior marriage) who accompanied her on the show. The mother doesn’t drink alcohol nor take drugs. The mother suffers from no mental illness. The mother believes in the Mormon religion and follows its practices. So why is this mother going through this unnecessary pain taken ordeal? The mother’s only crime is fighting for her two younger children against a corrupt system.

In addition, the mother stated that the father’s attorney Michael Burton told Seth Gutierrez to violate the court order and denied the mother her court-ordered visitation.

These games these judges and attorneys play with the lives of litigants in family court is criminal!

Both family court judges mentioned in this article will retire by the end of this year.  But the fact still remains, we have new judges that will fill those seats and we need to educate ourselves before we vote.  History has a funny way of repeating itself!

Judicial Candidate for District Court has BLOOD on her hands!Community Activist runs for Nevada State Assembly!