You are here: Home / Home - Featured / Clark Bossert runs for Congress for the “sake-of-freedom”! 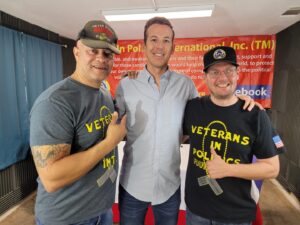 Bossert is a Christian man, educated, knowledgeable, rational thinker, and extremely passionate about our country.

The host asked Bossert what is the role of government. Bossert responded it’s life, liberty, and the pursuit of happiness.

When asked about foreign policy Bossert said that we should stand with our allies.

Bossert believes the Afghanistan disaster was orchestrated and he believed that the President should be charged with dereliction of duty.

Bossert said that our government has no tools to combat inflation.

Bossert believes that the family court system is deliberately suffocating litigants by sucking money out of the parties. Bossert continued by saying that the system is set up to give children to the worse parent known that the better parent would continue to fight for their children in turn keeping the case active for years and drum up cost.

Bossert believes in term limits for US Congress and Senate to avoid corruption. Bossert continues by saying if you cant get the job done in 12 years, you are not fit to lead.

Bossert said the three ways you can be a “swamp creature” are first if you care too much about money, secondly, if you are worried about the next election, last but not least if you have skeletons in your closet. This is how you get leveraged by people pulling on your strings to do their bidding.

The host brought up racism in our country and Bossert responded that the “silver bullet solution” to end racism in our country is radical humility, radical repentance, and radical forgiveness that’s how we can move forward, that’s the answer. It breaks my heart to see minority communities, not thriving…

Clark Bossert is a very impressive candidate, he is worthy of consideration.

To learn more about Clark Bossert:

Unveiling the “Snakes” of the Clark County Family Court!Afghanistan we need accountability!