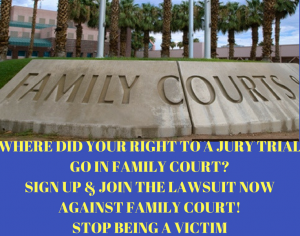 Rebecca Burton
Kicked out court observers out of a public courtroom, abused the rules of closed hearings.

Charles Hoskins
Was removed from the Guardianship position, because of mishandling cases. Enjoys getting his former law partners and friends elected and appointed to the family court bench.

Denise Gentile
Refuse to recuse herself after she admitted being roommates with an attorney before her court.

William Potter
Ordered an attorney to be handcuffed while she defended her client. Sanctioned by the Nevada Judiciary Commission 2 month’s suspension was ordered to attend and pay for a psychiatric evaluation for his anger.

Cheryl Moss
Orders children to be locked up because they did not want to leave with their father who has an anger problem and has been convicted of domestic violence.

Rena Hughes
Sanctioned by the Nevada Judiciary Commission, was deemed to not know the law and unable, to tell the truth, need to attend judicial college at her own expense. Violated mother’s constitutional right. Illegally close the courtroom off to the public. This judge has no place on the bench.

Cynthia Giuliani
Denied public access to the courtroom. Failed to disclose $2.5 million dollars in loans on her 2008 campaign form.

Mathew Harter
Only show up for work two days per week on tax dollars dime making over $160,000 per year. Uses his bench to shield his son from a burglary and home Invasion. Denied mom from seen her children until she pays half of a court-appointed therapist, this is a violation of custody laws and a judge is not supposed to be a debt collector.

Sandra Pomrenze
Uses racist terms in a custody case when show told an African American mom to comb her child’s nappy hair. Gave mother the children after she caused the death of one of her child.

Lisa Brown
Kicked out court observers without cause. Was removed from the bench by the voters when her name was Lisa Kent.

Judge has his head up his “A$$” gives children unsupervised to Multiple Felons!