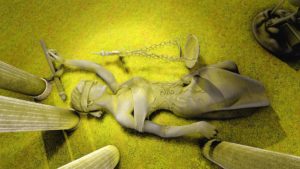 The Nevada Court Watchers PAC is composed of a group of individuals that, instead of working side-by-side with Veterans In Politics International in fighting corruption in the Clark County Family Court system, decided that they wanted to paint themselves as the one and only group in Southern Nevada monitoring judicial behavior.  They are doing whatever it is they do for their own glory, not the victims of the system.

Veterans In Politics has worked tirelessly to find candidates that will work for the betterment of the veterans in our community while continuing our heritage as defenders of the people by fighting corruption in the justice system.  There are many attorneys and judges on the bench that would like to silence Steve Sanson, but that’s because he has more knowledge about the corruption in Family Court than they want the general public to know.  Nevada Court Watcher PAC’s real goal is not to help families being torn apart in our court system, but to come after one man: Steve Sanson.

Nevada Court Watchers PAC is officially run by David Schoen, as can be seen by public records.  What most people don’t know is that Mr. Schoen and his wife are both employed by Jennifer Abrams.  Ms. Abrams in the middle of a legal battle with Steve Sanson and is using the Schoen’s and the Nevada Court Watchers PAC to hit him in the public sphere.  They are not so much running the organization of their own accord but at the whim of Ms. Abrams.  One of their lead minions’ in this mission to discredit Steve Sanson is Mark DiCiero, a washed-up disc jockey now employed by a once disbarred attorney.  The man, who was once in the limelight in Las Vegas is now trying to do everything he can to stay relevant and that means partnering with Nevada Court Watchers PAC to look like a knight in shining armor fighting for people’s rights when he is really trying to edge out Sanson and Veterans In Politics to claim glory for himself.

These people will do anything because they are desperate and know the truth of what they do and what we do, so they opt to kill the messenger because they can’t kill the message. Now they have reached a new low by threatening judges, judicial candidates and defaming Veterans In Politics and its President.

Intimidation and threats to control the judiciary:

Funny how they accuse Sanson of the very same thing that they are doing in the article they sent to all the judicial candidates: we’re going to attack you if you seek a particular endorsement.  The story goes Sanson phoned Judge Bryce Duckworth and asked him “why do you allow Marshal Willick to get away with so much crap in the Ansell case?”  It was a simple question brought up by Sanson as an observer in the courtroom without any kind of intention to intimidate or sway the judge.  Surprisingly, Duckworth practically involved Sanson in the case, ordering him to appear in the courtroom during Ansell’s case with a prewritten statement and no evidentiary hearing.  Duckworth took it upon himself to make all facts and findings on his own as judge, jury, and executioner.  After this display, Duckworth then recused himself from the case.  He did it, not because of Sanson but because his Bishop was Ansell’s CFO.  Then almost immediately, the Review-Journal story and presented the heavily edited video of the proceedings.  To add to the lunacy of the situation, two weeks later, Duckworth became the savior of Family Court by being appointed as its Presiding Judge. Being a dedicated court observer, Sanson filed a complaint with the Nevada Judicial Disciplinary Commission see link:

Looking at the case and the hints of a conflict of interest within, Veterans In Politics believes that Duckworth and Willick had to be coordinating their actions in the case!

Rigged endorsements from Veterans In Politics:

The Veterans In Politics endorsement interviews are open to the public and video is live-streamed and posted for viewers to watch at any time. Every other group goes into a closed room and there is no evidence of the process.  If you want to know how we doing things at Veterans In Politics, here is a video that can help you understand our process: Veterans In Politics President moving forward in 2020! https://www.youtube.com/watch?v=e-VatbW2vRw&t=3s.

Almost immediately after this article came out Ralston was terminated from channel 13 see link:

Didn’t the RJ recently bring back “Judging the Judges” after years of being dormant?

A disturbing history of domestic violence:

The court documents displayed in their attack on Sanson refer to events that took place in 1994; 26 years ago. These documents came from a child custody case in California. As you know the family court is theater and you practically don’t need evidence.  However, this is a case where Nevada Court Watchers PAC reveals their true colors and only gives you half of the truth.  What they are not telling you is that the criminal case was DISMISSED.  The only action to take place afterward is that Sanson sued his ex in a Small Claims Court for his bail money.  Nevada Court Watchers PAC has no story, only half-truths.  Not the kind of thing that screams integrity if you like us.

First and foremost Sanson served 6 years in the Marine Corps and 6 years in the Army and was 4 times honorably discharged.  He served in a combat theater and was diagnosed with Gulf War Syndrome and is now 100% service-connected. Do you know how many doctors and tests a person has to undergo to be a 100%, permanent service-connected disabled veteran?  This is just flagrantly untrue and we won’t even entertain this nonsense!

They quoted another crackpot columnist Jane Ann Morrison who had to write a retraction about Veterans In Politics, which was right before she retired.

These crackpots know that we have the ability to get candidates elected, especially judges because they run as nonpartisan candidates.

We have never asked for any favors from any of our endorsed candidates. We would like Nevada Court Watchers PAC to provide one judge that we endorsed that would officially admit that on a signed and notarized statement.  It would never happen.

We are glad that Nevada Court Watchers PAC has admitted that the Nevada Veterans Association & Nevada Veterans Council CANNOT ENDORSE!  These organizations can only give a rating, which amounts to nothing for candidates looking to build credibility in their races.

Unlike Nevada Court Watchers PAC, we aren’t going to retaliate against you from using your God-Given freedom to seek an endorsement from groups not associated with Veterans In Politics.  If you choose to stay away from us, that is your choice.  But, keep in mind, we have a track record and we will work for you to get you elected if you are endorsed by our group!

We would like to say thank you to Nevada Court Watchers PAC for handing us this article that is not covered under any Anti-SLAPP lawsuit…see you real soon!

If they are not talking about you, you must be doing something wrong!