The last thing that the Clark County Family Court needs is another prejudiced “judge” focused more on the enrichment of crony attorneys than on the best interests of the child.”

Veterans In Politics International (VIPI) would like to make sure that there are no corrupt judges on the bench – especially in Family Court. That is why we do our best to expose every single candidate we believe is bad for the citizens of Clark County.

Jason Stoffel is a candidate for Clark County Family Court, Department T. If elected, Stoffel will become just another toxic, robe-wearing crony puppet utilized by corrupt family lawyers to line their pockets, enrich court-connected experts, financially rape families, harm children, sadistically abuse litigants and their children, and generally abuse the legal process in the Courts for profit under the protection of sealed cases where their reprehensible actions are shielded from exposure. 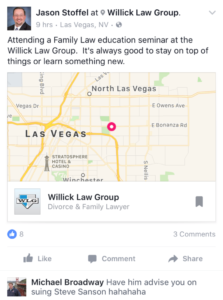 Not long ago, VIPI welcomed Stoffel with open arms. We invited him to many of our events and functions and we even referred multiple people to Stoffel to help them with their cases.

But as it turned out, Stoffel is a spineless sycophant. As soon as VIPI began exposing unethical behavior and corruption in family court, Stoffel was apparently presented with a choice and decided to sell out and align with the corrupt snakes who infest the Family Court, namely his idol attorney Marshal Willick who he notoriously fawns over and never fails to brown nose. Willick seems to have a Svengali-Esque power over Stoffel. Another way we believe Stoffel demonstrated his allegiance to Willick was by using his position as President of the Clark County Bar Association to ban our organization from the “Meet your Judge Mixer”, which we had previously attended for years without incident. (See article: Banned Meet Your Judge Mixers – A Broken System!) 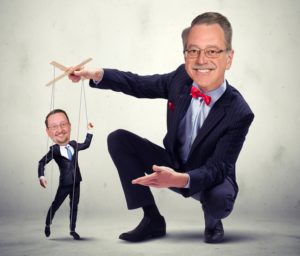 As a reward for selling his soul to the corrupt “racketeers” of the Family Court, Stoffel has been rewarded by Willick and his fiancée and partner in slime, attorney Jennifer Abrams with much ado, praise, and adoration through their online troll/bully/harassment front groups “Nevada Court Watchers” (NCW), “NCW PAC”, and their quasi-media front group “Our Nevada Judges.”

You can safely bet that Marshal Willick, his fiancée, and the other “lawyers” at The Willick Law Group won’t be on Stoffel’s recusal list despite their deep-seated relationship, however, any lawyer whose client’s case is assigned to Stoffel, where Willick, Abrams, or any of their staff is opposing counsel would be foolish to not use preempt Stoffel, who we believe would be a “judge” effectively controlled by Willick.

VIPI did not endorse Stoffel in the Primary of the 2014 campaign, but we supported him in the General election campaign against the incumbent, Judge Vincent Ochoa. During that campaign, Stoffel provided us with a wealth of information related to Ochoa’s son, Vicente Marcus Ochoa, who had robbed a balloon store during Judge Ochoa’s reelection campaign. (See article: Las Vegas Police Make Arrest In West Valley Party Supply Store Armed Robbery)

The feud between incumbent Judge Ochoa and Stoffel escalated when Ochoa confronted Stoffel regarding Stoffel’s allegations of the judge sleeping behind the bench and dozing off at a Veterans In Politics Endorsement Interview. This eventually culminated in a bar fight between the two candidates. (See article: Quarrel At A Bar Leads To Family Court Judge’s Removal From Custody Case.) 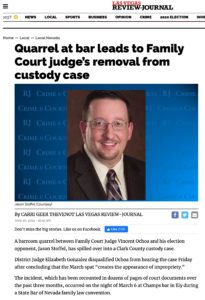 In 2016, Stoffel was sued by his own client, Russell Zitch, for malpractice, breach of contract, negligent hiring, and infliction of emotional distress, however, the lawsuit was dismissed due to the Statute of limitations. (See Eighth Judicial District Court, case # A-16-738562-C, https://www.clarkcountycourts.us/Anonymous/CaseDetail.aspx?CaseID=11693737). Though the time for the court to hear the malpractice case expired, it is clear that Stoffel’s client had substantive issues with his performance as an attorney. In addition, it is clear that Stoffel’s inability to control his temper to the point of getting into a physical altercation with the incumbent judge during his previous election campaign makes Stoffel an excellent candidate for psychiatric evaluation, but a lousy candidate for a judge, much less a judge adjudicating cases related to the best interests of children. Speaking of children, it stands to reason that decisions involving parent/child issues should probably be decided by someone that actually has children! Stoffel has never had the experience of being a parent but is expected to understand the concerns and anguish that some of the parents appearing before him.

Stoffel’s opponent in the upcoming Department T election is attorney Nadin Cutter. Since Cutter declined to take part in our vetting process, VIPI is not endorsing her, however, we do recommend her. She is a graduate of the William S. Boyd School of Law, where she made the Dean’s List. She also holds a BS in Economics from the Business College and Honors College at UNLV. Her business education could be particularly useful in certain Family Court cases involving family-owned businesses. Additionally, Cutter received two CALI awards for the highest grade in Family Law, Human Rights, and the Global Economy. (See: https://www.cutter4judge.com/about)

The last thing that the Clark County Family Court needs is another prejudiced “judge” focused more on the enrichment of crony attorneys than on the best interests of the child.

Educate yourself before you vote!

In Closing, on June 11th the Veterans In Politics published “A PUBLIC NOTICE TO CEASE AND DESIST” (see article https://veteransinpolitics.org/2020/06/a-public-notice-to-cease-and-desist/?fbclid=IwAR0yL9WyeXc-oA0HKhvmm6OQTqWPHYl-lnx7_Xh5X90cQuKzK9q3aN3BTzI) you have a logo on your website claiming an endorsement. Again we own the name and logo, it’s easy to figure out by doing your due diligence go to the Nevada Secretary of State website. So please remove the logo from your site immediately, it is TRADEMARKED.

NEVADA ATTORNEY ALEX B. GHIBAUDO – ANOTHER RESTRAINING ORDERMedical Sergeant gunning for the Nevada State University Board of Regent

A Nevada Lawyer said ENOUGH to the corruption